It's that time of year again! As South by Southwest makes waves in Austin, its fierce Spillover is gushing through the land of the Riverwalk. We know how overwhelming it can be to take in so Current staffers are here to guide you through the madess locally and, a few miles northwest, in the heart of the beast. Check back here for a constant live stream of SXSW and Spillover updates + goodies. As the week progresses, we will be posting full length photo galleries of shows and videos of some choice sets.

Feel free to get in on the fun yourself, tagging any Instagram or Twitter posts of the madness here and in Austin with the #SXSA hashtag. Let's do this!

GALLERY: MARDUK AT THE KOROVA // Photos by Joe Turner.

GALLERY: ANDREW W.K. AT THE KOROVA  // Photos by Miguel Nelson and Chelsea Wise.

Diarrhea Planet scales the stage at the Ad Hoc showcase. Instagram photo (@sacurrent) by M. R. Brown. SXSW FRIDAY DISPATCH: DIARRHEA PLANET AT CHEER UP CHARLIE’S "SXSW plays home to many independent and DIY acts. Some are fashion shows with guitars while others grind away hoping to finally land that record deal. It’s refreshing to see a group that doesn’t take themselves too seriously, enjoying the festival and its audience." -M. R. Brown Read more: http://bit.ly/YyGeY6

Usher onstage with the Afghan Whigs. SXSW FRIDAY DISPATCH: AFGHAN WHIGS FT USHER "Usher then dueted with Greg Dulli on the Afghan Whigs song “Something Hot” from 1965.  It sounded great and the crowd was loving it.  After that it became the Usher show.  Those of us wanting to see an Afghan Whigs show, didn’t get much more.  But it seems we were in the minority." -Jaime Monzon Read more + video: http://bit.ly/YgdDLl

HRVRD singer Jesse Clasen gets some help from the audience. Photo by Jaime Monzon. SXSW FRIDAY DISPATCH: HRVRD AT EQUAL VISION SHOWCASE "Lead singer Jesse grabbed a megaphone, jumped off the stage and walked through the crowd singing through it while everyone sang along with him.  He then jumped back onstage, thanked everyone and went into an almost 10 min long verions of Inevitable‘s “On With Disease”.  I had shivers the whole time." -Jaime Monzon Read more + video: http://bit.ly/15SHVFZ

Tegan and Sara at The Main. Photo by Jaime Monzon. SXSW THURSDAY DISPATCH: TEGAN AND SARA AT THE MAIN Tegan and Sara took the stage about 12:05; Letting us know, “Sorry we’re late, Tegan and I were getting manicures backstage.” -Jaime Monzon Read more: http://bit.ly/ZujXgt 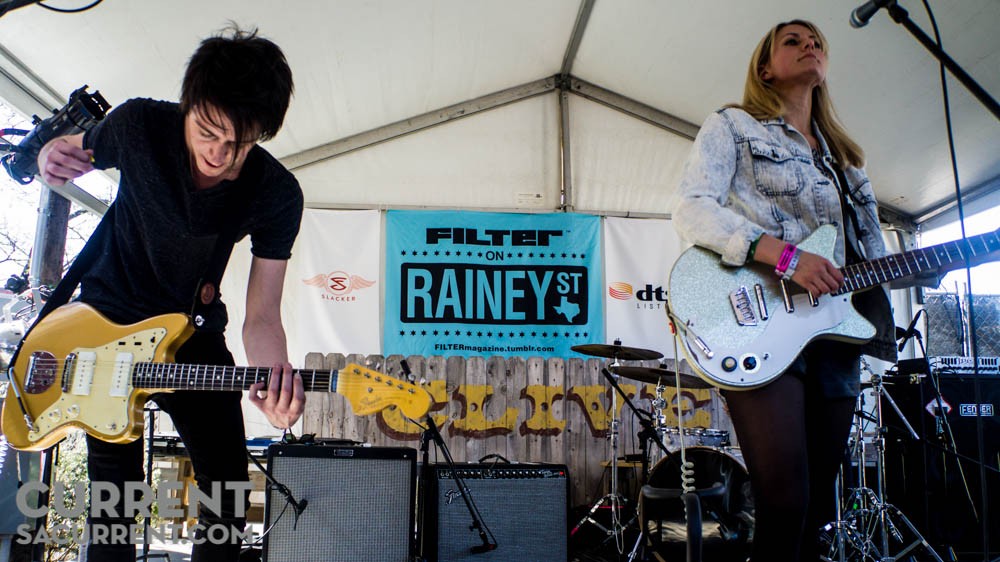 The Neighbourhood at SXSW2013. Photo by Jaime Monzon. SXSW WEDNESDAY DISPATCH: THE NEIGHBOURHOOD AT FILTER ON RAINEY ST. PARTY Their newest single “Little Death” was a great live song that culminated with one of the speakers catching fire. Very fitting. -Jaime Monzon Read more + video: http://bit.ly/12TzhcB

Jason Bentley talks to Martin Gore and David Gahan. Photo and video by Jaime Monzon. SXSW WEDNESDAY DISPATCH: SXSW INTERVIEWS DEPECHE MODE Depeche Mode was interviewed by KCRW Music Director, Jason Bentley. They spoke at length about the making of their new album Delta Machine, due out later this month. The band was in great spirits and kept the audience entertained with their onstage banter and jokes. -Jaime Monzon Read more + video: http://bit.ly/152gk2R

Gaby Moreno at Central Presbyterian Church. Photo by J.D. Swerzenski. SXSW TUESDAY DISPATCH: GABY MORENO SHINES, MARNIE STERN DISAPPOINTS SXSW just keeps finding ways to get bigger, be it the giant inflatable Doritos dispenser/stage, the now ubiquitous celebrity spotting, or the fact that Cirque de Soleil somehow now qualifies as a music showcase. But expanding the music portion a day earlier to Tuesday probably says more about the SXSW swell than any of that, with a full schedule of notable showcases tilling the ground for the days to follow. Here’s what I caught this first day around town. -J.D. Swerzenski Read more: http://bit.ly/10MhGhM