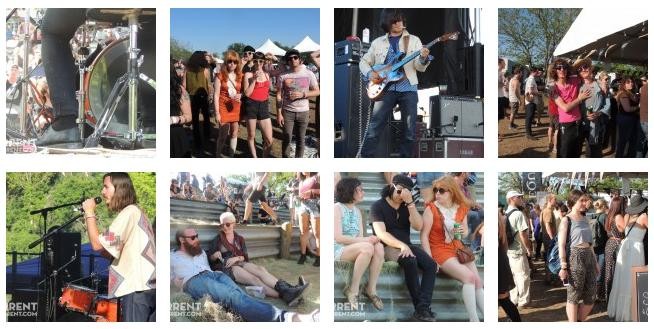 Check out our slideshow of Psych Fest 2013

There are generally two schools of thought when it comes to attending music festivals in Austin: go solo, go hard, try to see everything, sleep anywhere; or go with someone, be relaxed, make a plan, get a hotel. This past weekend for the 6th Annual Austin Psych Fest (and for the first time in my life) I found myself going with the "make a plan/ get a hotel" strategy. I guess I'm getting old. I originally planned to camp for the whole weekend on the festival grounds, but my girlfriend (and festival partner) convinced me otherwise. Our hotel was 5 minutes from the venue (Carson Creek Ranch) and close enough to the Colorado River to find a nice swim spot.

Day 1: Arrived at a relaxed 10:30 pm.  Main Objective: Acid Mothers Temple (12:30). Black Rebel Motorcycle Club was the other headliner that night. I was not impressed. They sounded neither black (in any sense of the word) nor rebellious, and there were only three guys in the band, so hardly a club.  In my opinion, it was boring average rock with little to no roll – not psychedelic (in any sense of the word). Then there was Acid Mothers Temple (Japan): experimental heavy psych metal. LOUD.Wild. Stellar musicianship. includes a theremin. My notes: “The Grateful Dead + early Metallica in the afterlife. Aboriginal.” Very psychedelic. Would've liked to see: Om, Tinariwen, Lumerians. Day 2: Arrived at 4:30 pm to Golden Animals, a classic sounding folk-y psych duo in the school of The Jesus and Mary Chain. Melodic choices by the singer/guitarist are an obvious nod to Jim Morrison. At the amphitheater stage was Holy Drug Couple, a trio (don't let the name fool you) from Chile: dreamy indie psych rock. Good. Back to the main stage for Boris (Japan). THIS GROUP IS SERIOUS. Loud, blooming psychedelic drone sludge. My notes: " Sounds like Type O Negative + Explosions in the Sky. Black Rebel Motorcycle Club and Boris should trade names." Tent stage for Man or Astroman: Dangerously fun surf punk in orange space suits. Hard, fast beach freakout music. I have the feeling a serious pit usually erupts when these guys play, but the crowd was rather relaxed. Just before Os Mutantes (Brazilian psych from the 60's) at 10pm on the main stage it started raining. called it a night and left just as the venue began to completely liquify. My girlfriend was right about booking a hotel. Would've liked to see: LSD and the Search for God, Brain Pulse Music, Black Bananas, Woodsman. Day 3: Arrived at 4:00 pm to The Shivas at the amphitheater stage. Four piece garage psych band reminiscent of a cleaner Sonic Youth. Groovy, energizing. Bought LP. Things start to get interesting. I experience an unplanned combined set from White Fence (main stage) and Dreamtime (amphitheater) while sitting on a blanket between the two. Then, Deap Vally: Two piece girl stomp blues. My notes: "Soulful, serious musicians, solid blues roots, but singer should go more Tina Turner and less Christina Aguilera." Then King Khan & BBQ Show on main stage: "Like Sublime playing the blues, with a sprinkle of Butthole Surfers." Next was Roky Erikson, happy and sad at the same time. I'm glad he's still alive and being creative, but I'll stick with my 13th Floor Elevator albums.  At least his guitar was plugged in and audible (which was not the case at SXSW a year ago). By this time every light show from every stage had spilled off into the air: aurora borealis everywhere, beautiful continuous sunset, painted clouds streaking across the sky. Next were two of my favorite groups back to back at the tent stage: Indian Jewelry (Houston) and The Growlers (Costa Mesa, CA). My notes on IJ: "Decedent, tribal, industrial, hypnotic. Like David Bowie on codeine. If aliens landed at an Indian Jewelry show they would say 'our work here is done.'" I scored their new album "Peel It" on cassette tape. While stumbling around before The Growlers set I began to notice a sound as if ten airplanes were suddenly landing on top of the festival all at once.  It sounded like a huge glowing beam of rock and roll music was blasting through the middle the earth, like guitars spitting heavenly fire. I looked into the corridor of smoke and rainbows erupting from the main stage and realized what was going on. This was The Black Angels. It was too powerful to get any closer. I would have to explore them at another time, but I immediately realized why I have heard their name again and again in the context of modern psychedelic music. They are the real deal. Similarly important, in my opinion, are The Growlers. A real rock and roll band. They are the closest thing to the Rolling Stones our generation will ever know. Like The Strokes, but on real drugs and without trust funds. West coast Americana freak music. My notes on The Growlers: "sounds like a young Roky Erikson fronting The Doors, playing country music at a gay cabaret on a beach, just south of the hopeful side of hell." Their newest album "Hung At Heart" (Everloving Records) is great.  As we plodded and slopped through the mud on the way out, Billy Gibbons and The Moving Sidewalks plodded and slopped their way through covers of "Foxy Lady" and "Red House." It was definitely time to go, and I will definitely be coming back to Austin Psych Fest again next year.