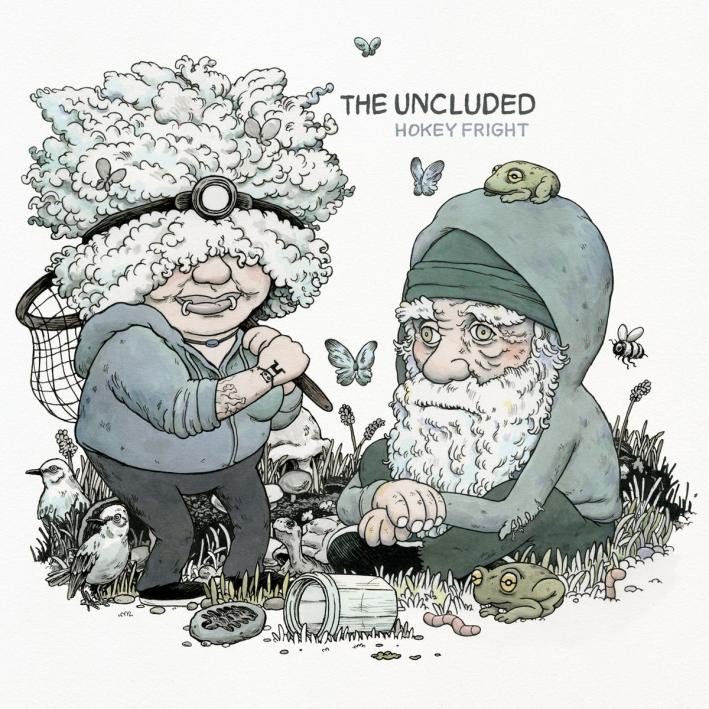 The Uncluded is Kimya Dawson, of Moldy Peaches and "Juno" fame, and Aesop Rock, a hip hop emcee/producer whose rhymes and storytelling are legendary in independent hip hop circles.

The lurking danger was that the combination of such distinct styles could muck up the album, but the interplay on Hokey Fright is so well crafted that the two have achieved true songwriting evolution.

Kimya and Aesop produced all the music on the album (except the drums on "Delicate Cycle") and varied the recording methods, which gives the entire album a really unique audio texture.

Seriously, who uses a game of ping pong as a rhythm track for an entire song?

Hokey Fright allows room for both artists to exercise their specialties, while also forcing each to try something new. On "Tits up" Kimya trades rhymes with Aesop like a hip hop veteran, while the seasoned emcee takes on the challenge of singing on "Organs" - albeit both in their own unique way.

A video put out by Rhymesayers ahead of the album's release features both artists talking about the writing process, speaking freely about recent friends and loved ones who had passed away and the process for dealing with that loss, which became a major theme in the record itself.

If the blend of Kimya's querky songwriting and Aesop's unorthodox rhyme schemes seem a little overwhelming on the first listen, be patient and keep going. I must admit that the first time I heard "Delicate Cycle" and "Earthquake" I wasn't on board right away.

I do have to say that this is one of those albums that gets better and better each time you listen to it.

You could say that "Delicate Cycle" caters more to Kimya's strengths, and she definitely owns her part on this song, telling a straightforward autobiographical story, her direct lyrical approach set off by Aesop's fast-moving metaphors and wordplay.

The simplicity of the beat of "TV on 10"souds like it could be on an Aesop Rock solo album, and may be a great place to start if you are coming to this album a bigger fan of the emcee. Also try "Bats" and "Tits up."

"Earthquake" and "Organs" really hit home on the subject of death and what it takes to come to terms with a catastrophic incident. Listen carefully to the words in these tracks, they are incredibly sad but maintain a sense of hope for the future in the same way that a good church hymn is able to make you feel both humbled and uplifted.

"Bats" - Old-school choppy Aesop Rock beat that showcases his effortless wordplay, making so many turns you can easily get lost if you are not actively paying attention. The other great thing about this track is how Kimya handles her part of the song. This beat is an unorthodox hip hop instrumental and she delivers her clever lyrics flawlessly.

"Eyeball Soup" - I just really love this strange cha-cha type beat and how it sounds completely different than anything else on this album. Really adds a good musical diversity to the album.

*I could probably listen to this track for an hour straight, dancing like a crazy person.

"Boomerang" - Just a great jam of a beat that keeps marching along as both Kimya and Aesop meander through it with some beautiful lyrics reflecting back on a sense of loss and coping.

Hokey Fright is a very well thought out record that you can listen to all the way through, providing a journey of emotion and self-reflection that only the most skilled of storytellers can execute. In this case, there are two of them.