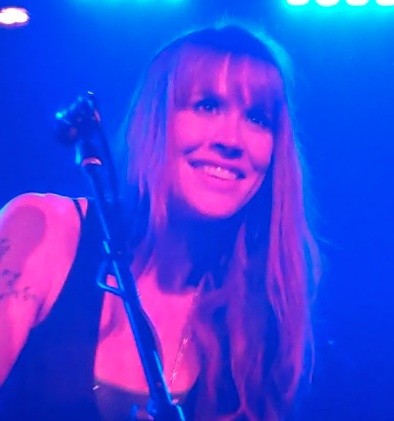 I knew there was a good chance I'd dig Bekah Kelso's CD release party at 502 on Friday, but I never thought that her live show would be so different from her album. Within the Shifting Shade is a polished, well-produced pop affair with elements ranging from alt pop and folk to funk and blues. On a live setting, Kelso goes wild: funk, R & B and blues reign supreme, and her roaring stage presence and voice (helped by her own pre-recorded harmonies) was all she needed to show she's a top performer. Yes, she had an acoustic guitar on at all times, but she played little. It was all about her. And she was on fire. Blame it in part on her infant son Kaius.

"I feel like I'm on crack!" Kelso told me minutes before the show. "My son chose precisely this week to wake up in the middle of the night. I had to drink one of those 5-hour Energy things, and now I'm flying."

Thanks, Kaius. Momma did just fine.

Her vocal performance was flawless and the band responded well throughout the set's 90 + minutes, but my two favorite moments came during the epic rendition of "A Thousand Little Words" and in the second half of "In the Blue," when keyboardist Ricky Hernández and guitarist/producer Damián Rodríguez took off on their own. It was Kelso's own private "Great Gig in the Sky":

Next for her: an Aug. 28 trio set at Boneshakers (her on acoustic, Rodríguez on bass and Martín Barrera on percussion) on an intriguing music/poetry/art bill featuring Cryin' D.T. Buffkin & The Bad Breath, Jeannette Muniz, Daniela Riojas and others.