British teen sensation One Direction have just announced the North American dates of its Where We Are 2014 stadium tour, which begins April in Latin America, moves to Europe in May, and comes to America in August. They will be stopping in San Antonio on September 21 at the Alamodome. Tonight, they will have a special performance at Central Park in New York.

Tickets go on sale on Saturday, December 7 at livenation.com and alamodome.com. Presale tickets will be available on Tuesday, December 3, by clicking here.

Go to the next page to see the second part of the band's announcement.

The band has just released Midnight Memories, their third studio album, which features 15 of 18 songs co-written by the band. Go to the next page to see them perform first single "Story of my Life" at the 2013 American Music Awards, where the group took two prizes (Best Pop/Rock Album for Take Me Home and Best Pop/Rock Group).

Midnight Memories was released on November 25 and already went to number one in 97 countries. 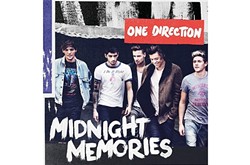