DUELING BLOGS: To Kanye or Not to Kanye

December 05, 2013 at 3:50 PM
comment
Kanye West and Kendrick Lamar are stopping by SA this Sunday on the Yeezus tour. Can't decide if you should go? Current contributors M.R. Brown and James Courtney help you weigh your options...

To call Kanye West the greatest artist of all time is quite frankly an insult to the countless artists, in every artistic field, of days past and present. West is a respectable performer and overblown personality that still struggles with separating the two. I reviewed West’s most recent album, Yeezus and noted that “West’s lyrics scream for attention, but more as a batty socialite than a man with something worth hearing.” There is an irritating tendency in criticism to qualify a work based around the life of its artist, as if assuming a work cannot have sufficient relevance on its own. However, in the case of West, he can’t help but bleed through into his own work, whether in his crass comments or via delirious diatribes on socio-political injustices. Holding West against his own word vomit is almost too easy. West has openly admitted he is not a fan of books, he believes that he is undoubtedly the voice of this generation, he thinks vanity and himself are synonymous and he is overwhelmed at the idea of taking responsibility for a water bottle. West does, however, exist on a plane above any of his peers. He is pretentious, sure, egotistical, definitely, and yet he is arguably the only rapper who can hold court with Jay-Z. His life, much like his career, is a roller coaster that keeps going up. But much of this rise is dependent upon the brilliance of those surrounding West, and less about the rapper himself, who admittedly cannot even sing. From Chris Martin to Pusha T, Bon Iver to Lil Wayne, West’s collaborations feel like a venerable who’s-who of the business. However, his list of producers is equally reputable and perhaps even more important to his success. His successive runs of brilliant albums have certainly benefitted from the golden touch of industry heavyweights. Packaging musicians for mass consumption is okay with West though, as he says “To use is necessary. If you can’t be used than you’re useless.” A bold statement, yet one that is overtly submissive. When boiled down and stripped to its bones, the lyricism and vision of West is undeniable. He has not reached this point in his career by some dumb luck. His growth throughout the years as both the artist and entity is as astounding as it is calculated. One thing is for sure, he is pure entertainment value. —M.R. Brown

When Kanye West began his guerrilla marketing campaign for Yeezus in early summer of this year, it followed a few years of PR faux pas, a media field day over his relationship with icon/scapegoat Kim Kardashian, and two highly successful collaborative efforts (Watch the Throne and Cruel Summer). This not-altogether-positive media saturation, combined with the abrasive sound of the new record and the man's insistence on referring to himself in outlandishly favorable terms, has contributed to Kanye's status as one of the most polarizing mega-figures in pop culture today. If you're feeling fickle about Mr. West these days or if perhaps you've never learned to appreciate his genius, his somewhat pricey show at The AT&T Center this Sunday might seem utterly out of the question. And, Imma let you finish sipping your haterade, but here's why you need to put aside your doubts, fork over that dough, and join me among the Yeezy faithful on Sunday. 21 Grammies. Not that these awards mean anything, but don't they? Don’t they mean that, as a producer and a performing artist, Kanye has been continually recognized as a true exemplar? 9 years, 8 excellent albums. It may seem like he's dominated your Twitter feed for centuries, but Kanye made his debut as a rapper with 2004's College Dropout and has since released a constant stream of diverse, searching, provocative, and – quite frankly – game-changing music. Consider: it's as difficult to imagine 2004 without "Jesus Walks" as it is to imagine 2009 without “Amazing,” 2010 without “Monster,” or 2012 without "N----- in Paris." And isn't that a mark of artistic power; to create art that rises above the expectations of a particular moment and redefines those expectations? Something that stands out or seems oddly necessary? Kanye has never been a perfect rapper or producer, but he has made some multifaceted gems, set some trends, and radically challenged expectations in both areas. Yeezus is better than you think it is. This new stuff might not be the bright light crescendo of My Beautiful Dark Twisted Fantasy, not quite the soundtrack for your zany summer, not quite a recreation of what we're most comfortable with loving about Kanye West – but it is exactly what in needs to be. Yeezus is a record of ridiculous paradoxes, of profane prayers, of filleted memories and drug-drowned insecurities, of ignorance and a pervasive sense of deep-knowing. There's abject ugliness aplenty and a festering heart of bass and wire and fog that will keep you up at night if you let it. Showmanship. It almost seems like this argument makes itself. Mr. West, for better and for (much) worse, is know for making a scene – with or without a microphone. From a sheer spectator's standpoint, this show promises to be a cornucopia of ornate pseudo-archetypal design, brilliant if untamed rants, and uncanny musical presence. There will be mountain screens, idol worship, shiny masks, and some of the best popular music in recent memory. Still need convincing? Oh yeah – Kendrick Motherfucking Lamar will be there too. C’mon now. —James Courtney 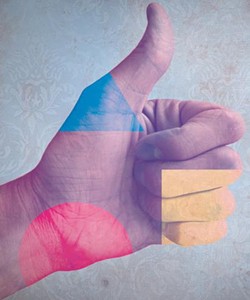 What do you think? Is Kanye the GOAT? Are you going to this show on Sunday?