Two Dead in Car Crash Outside Mohawk at SXSW

Two people were killed early Thursday morning when a car crashed into the crowd outside the Mohawk on Red River Street, trivializing this week's celebration of music and music industry at SXSW.

Austin Chief of Police Art Acevado confirmed the death of two victims at the scene, a man and a woman riding a moped. Twenty-three others were injured in the crash, five critically. As of publication, the victims' names have not been released. Police say the driver is in custody.

After leaving an official SXSW showcase at the Mohawk, featuring X, Crosses and Together Pangea, I was waiting on Red River and East 9th Street at 12:30am, and witnessed the affair in real time. The driver, in a sedan and evidently drunk, pulled onto the curb at Red River and East 9th and turned onto Red River. The street was closed off from traffic with temporary barriers for the festival.

The driver avoided the barriers, accelerated and hit a man, sending him over the vehicle and into the air. Apparently unaware of the first collision, the driver then accelerated into a significant crowd outside the Mohawk, just before the intersection of Red River and East 10th Street. Bodies were tossed in the air or knocked to the ground as the vehicle struck the crowd at a decent speed.

In its entirety, the incident took place in under a minute. 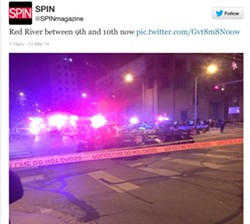