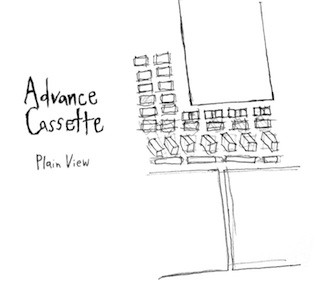 Plain View, the debut EP from local alt-rockers Advance Cassette, is full of feedback and fuzz, ferocity and feeling. Capturing perfectly the punk-addled and emotive feel of some of your favorite 1990's bands—from Weezer to Nirvana to Smashing Pumpkins—the four tracks on this EP are also, importantly, impossible to pin down. Every time you think you're ready to declare that Advance Cassette sounds like some bygone alt-rock outfit in particular, you find yourself surprised by an unfamiliar nuance and realize that their sound is only partially an updated amalgamation of lessons learned in the 1990s and early aughts.

There's a pervasive sense of restlessness conveyed in the heavy motions of Samuel Edmonson's bass and the wiry vocals of singer/guitarist Stefan Scott that lends Plain View an air of tense immediacy unlike many bands can accomplish.

Opener and standout track “Slow Down,” the grungiest track on the EP, is a good distillation of the things that this young band seems to do best—satisfyingly catchy lyrics and vocal arrangements, plodding bass and muddy walls of cyclonic feedback. Above all, Plain View shows off the fact that these four bros in Advance Cassette can really write engaging songs; songs that are catchy enough to hum and sway along to and complicated enough to listen to over and over again.