"It’s not very pretty, that’s why we’re called FEA,” said Jenn Alva at FEA's debut show at Maverick Music Festival back in March. Though the music isn't conventionally "pretty," it sure as hell shreds, as Girl in a Coma's Jenn Alva and Phanie Diaz take a harder, Riot grrrl approach to their new project. Celebrating Alva's birthday on Thursday at Hi-Tones, expect FEA to bring a high-octane and cake-fueled performance.

We've made it pretty clear how we feel about Demitasse's debut LP Blue Medicine. Elsewhere I've called it the "songwriting pair’s most exposed, emotionally spry and career-topping effort" and a "defiant stance against perfectionism." Now it's your turn to catch Joe Reyes and Erik Sanden in action at this free release party at Tucker's. And if you're feeling the vibe, you can pick up a copy of Blue Medicine on blue vinyl, or a more conventionally colored CD.

Avant-garde Austin musician Roger Sellers’ website begs you to “Imagine folk-dance-Americana-electric-symphonic fusion, where Philip Glass, Sufjan Stevens and Joanna Newsom all groove to late night ambient house music in George Martin’s living room.” This is the best description I have found of the man’s unique sound(s). Sellers creates captivating and diverse sonic landscapes that translate to a riveting, unpredictable and transfixing live show. The dude plays guitar, banjo, mandolin, bass, bells, organ, piano and drums. Sometimes he plays with a full band and sometimes he plays with a streamlined digital solo setup. And, though he may not fit all of those things into his SA performance, the sheer possibilities indicate that Sellers’ set is sure to be an engrossing experience. Along with visual stimulation provided by Sixto-Juan Zavala, show-goers will be treated to up-and-coming local acts PBLC (particularly awesome), Brave Microwave and Lizarazo. $3, 9 pm, Hi-Tones, 621 E Dewey, (210) 785-8777 - James Courtney 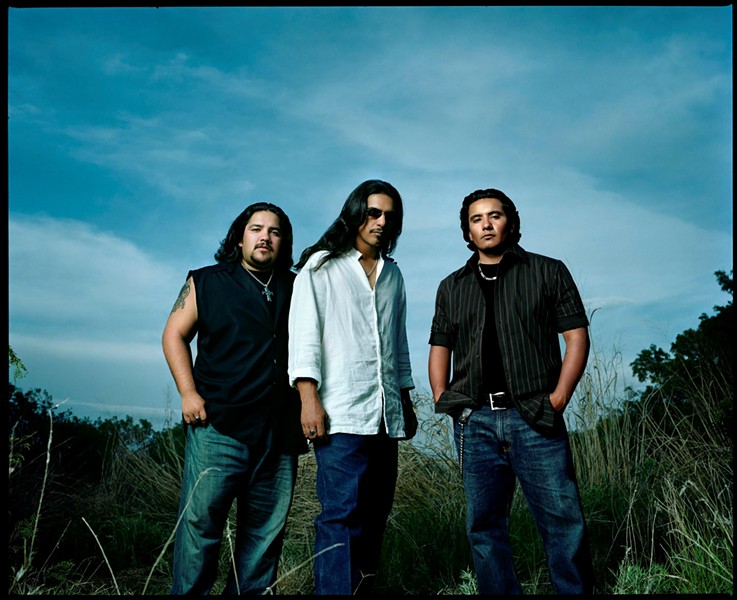 Lifting its name from the Danny Trejo flick of my dreams, Tejano Explosion is here to rock its way through Fiesta. Though it's already been blasting through a lineup of Tejano, Cumbia and Norteño artists for almost a week, the detonación continues through 2014’s marathon Fiesta celebration. This week’s highlights include saxophonist Joe Vic Reyna y los Kumbacheros (Thursday, 5:30pm), the old school, big band sound of SA’s Liberty Band (Friday, 7:30pm), and AB Quintanilla y los Kumbia King All Starz (Saturday, 9pm). Also on Friday, the undisputed dynamite of the Explosion, Los Lonely Boys, take the stage at 10:30pm. From San Angelo, Tx, the Boys play a self-described style of “Texican Rock ‘n’ Roll,” blending Tejano with Adult Album Alternative. With their ’04 dad jam “Heaven,” Los Lonely Boys earned themselves a Grammy for Best Pop Performance and a spot on AAA radio for all time.