5 Shows You Need To See This Weekend 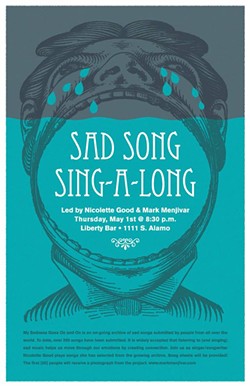 My Sadness Goes On and On is an archive of sad songs submitted by people from all over the world. To bring the 250 song library to life, singer/songwriter Nicolette Good and Mark Menjivar will lead the cathartic exercise. With only a paltry few days left in her kickstarter campaign to underwrite her next album, Good just pasted her $7,000 goal. Hopefully, for the sake of her sad song exercise, she'll be able to channel that excitement into her playing.

Mother Falcon, the beloved orchestral pop outfit from Austin, is truly an odd bird. This unique project is comprised of 21 people and manages to make music that is cohesive, polished and just plain delightful to experience. Even in all the intricacy of the band’s songs, there is a light and refreshing wind that blows through them. With simple lyrics and moving (often tempestuous) arrangements, Mother Falcon is singularly adept at extracting precise emotions and at sweeping them all away.

While the band sounds pretty darn great on record (you can stream sophomore LP You Knew at motherfalconmusic.bandcamp.com), its songs really come to life in the live setting. Particularly with 502 Bar’s excellent acoustics, seeing Mother Falcon live promises to be riveting. Chris Maddin and Bright like the Sun will open. $10, 9pm, 502 Bar, 502 Embassy Oaks, (210) 257-8125, 502bar.com

Architects Of Cinema will be making their San Antonio debut on the Hays Street Bridge this Saturday. AOC is an intermedia trio comprised of prepared-guitarist Sandy Ewen, muscle-dancer Y.E.T. Torres and film-projector Chris Nelson. They have been working together for approximately five years to work out a shared language between moving and static sound and image. With Marriage and Shit and Shine.—Lance Higdon
Free, 8pm, Hays Street Bridge

Let’s get something straight. You might not know who Kool Keith is, but you really fucking should. Without Kool Keith blazing a weirdo trail in the 1980s with Ultramagnetic MCs and in the 1990s with his solo albums (under his name and the alias Dr. Octagon), it is hard to imagine how the rap landscape would look, but it’s fair to say that it would be very different. Keith’s consciously off-kilter (and dark) subject matter and delivery styles paved the way for folks like Eminem, Hopsin and Odd Future. Kool Keith has kept at it ever since his Bronx beginnings and has been more active post-2000 than the vast majority of rappers who came up in the ’80s. His is a well-honed style and an ear tuned to a frequency that just doesn’t come through for many rappers. With support from local duo Chisme, celebrating their release of It’s OK to Dream.

Founded in 2006, ARTSLAM takes the creative process and makes it live with a roster of local artists painting, drawing and creating in real time. With MWG, Galacticat, Rivera, Moondoctor and Freshtilldef performing music.

ArtSlam from Adolph Lopez on Vimeo.