In the third season of NBC's 30 Rock, there's an ongoing gag about Jenna Maroney starring in a Janis Joplin biopic without the rights to Joplin's name or music. Instead, they move forward with the name Janis Jopler, singing budget versions of Joplin and Big Brother and the Holding Company material—"take another little chunk of my love now mister."

In a somewhat similar effort, writer John Ridley penned All is by My Side, a Jimi Hendrix biopic without any of the rights to Hendrix's music. But as the screenwriter of 12 Years a Slave, which won Ridley an Oscar for Best Adapted Screenplay, we can rest easy knowing that the Hendrix's onscreen likeness is, hypothetically, in good hands. To get around the denial from the Hendrix estate to use any of the music, Ridley placed his narrative before Jimi's '67 debut Are You Experienced. Set in London in '66 and '67, All is By My Side will feature recreations of the music Hendrix performed in that period.

Andre 3000 of Outkast has stepped in to play the role of the guitar master, practicing six hours a day learning lefty guitar. You can check the trailer below for a peak at his performance in the flick, due out 9/26 in the US. 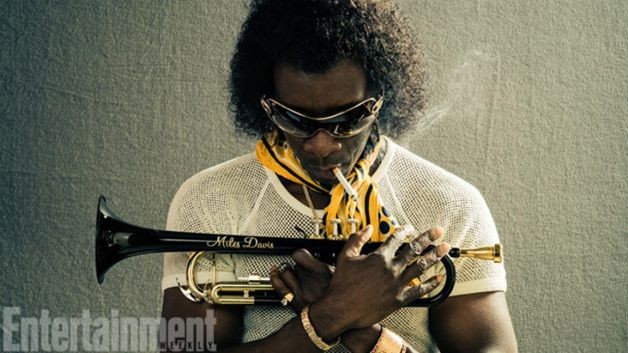 Meanwhile, Don Cheadle's crowd-funded take on the life of Miles Davis just surpassed the necessary goal of $325,000 on

Cheadle's passion project, the Miles Davis biopic called Miles Ahead, broke its crowd-funding goal of $325,000 on Indie Gogo. Like the Hendrix project,the Cheadle-directed, Cheadle-starring flick will focus on a particular time in the artist's career. In 1979, when the trumpeter was exiting a five-year hiatus, Davis meets with a Rolling Stone reporter (Ewan McGregor) to help spark a return to music.

Unlike the Hendrix project, the Cheadle-directed, Cheadle-starring biopic has the approval of the Miles Davis estate to use the trumpeter's massive catalogue of recorded music. Given Miles' personal proclivities and notoriously raspy voice, Cheadle has posed an exciting creative challenge for his directorial debut.