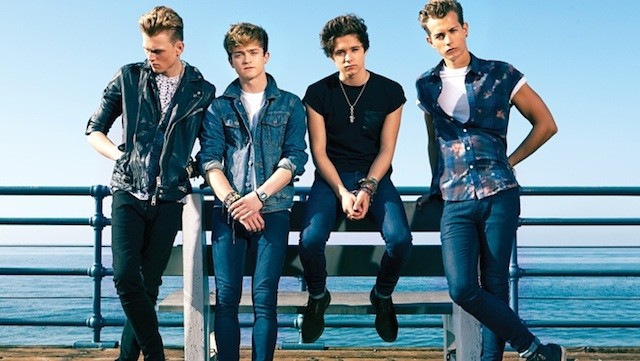 In anticipation of Austin Mahone's homecoming concert at the Freeman Coliseum this Friday, we decided to lend a spotlight to his supporting act on tour. Hailing from the United Kingdom, the Vamps are a pop rock band who, like Austin Mahone, began making waves on YouTube by uploading acoustic cover videos in 2012.

The Vamps are comprised of four young men, not even twenty years old: Brad Simpson as lead singer, James McVey on guitar,  Connor Ball playing bass, and Tristan Evans on the drums. After their Internet buzz reached Mercury Records, they were signed at the end of 2012 and started work on their first original material. In late summer of 2013, they posted their first original song and debut single and accompanying music video, garnering millions of view in a few weeks. Their two singles reached number two and three respectively on the UK Singles Chart, and introduced them to radio airplay and a wider audience outside of their YouTube channel.

The Vamps already had their fame snowball rolling, and they further established a dedicated following through their supporting tour for McFly. As they expanded their public appearances to festivals and further supporting roles for Selena Gomez, Taylor Swift, and The Wanted, they established a One Direction-like fanbase of rabid tween girls, complete with the shameless branding and merchandising that only helped advance their public image. The conditions were ripe for their debut album, and it debuted at Number 2 on the UK Albums chart when it dropped on April 14 this year.

Fresh off a new single with Demi Lovato released two months ago, the Vamps embarked on their tour with Austin Mahone much to the delight of fangirls everywhere. Promising infectious guitar-driven melodies, poppy sing-a-longs, and lots of energy, the Vamps are the perfect support for Austin Mahone's more electronic recent work. Be sure to get to Freeman early and don't skip the opening act.