Perhaps more than any other genre of rock ‘n’ roll, garage rock is a music of attitude and items. Of fuzz pedals and Orange amps. Of dressing like Mad Max and plugging into a fat stack of tube-driven power. Of weird-breasted coats, stripped-down drum kits and holy, everlasting denim in blue, bleached and black.

As for attitude, it’s an essential for the essentials in the garage canon. With only so many variations of drum, bass, keys and guitar that can be arranged, rock ‘n’ roll chutzpa is a necessity to bring these lineups to life in each generation. The Nuggets, the Stooges, the Cramps, the Gories, the Black Lips and the Burger bands—as long as musicians unite before mastering their instruments, the garage medium will be alive and well in America.

Based in Los Angeles, Lolipop Records knows how to hit the garage rock sweet spot. One of a growing number of like-minded label/stores across the country, Lolipop has been cutting jangly, guitar-driven tunes since 2006. Presenting some of their finest in SA, the Lolipop Caravan tour is a delight of a Monday evening. 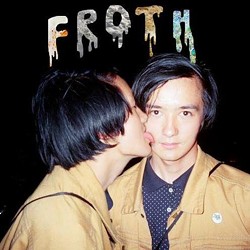 From Echo Park, California, Froth performs with the nonchalant presence of French new wave, squeezing out lovely little ditties of spaced-out pop. Impeccable bass lines and 12-string guitar drive 2013’s Patterns, an eight-track release of ’60s garage and psych references. But the quartet is truly set up apart by the omnichord, a small handheld Suzuki instrument that looks like a cross between a baby grand and a wall thermostat and sounds like a rock ‘n’ roll instrument from the Zelda franchise. Playing major, minor and seventh chords, the ’80s-era electronic instrument fills out Froth’s sound in a delightful and unmatched kitsch.

Tacky, wacky, and rampant with power chords, Wyatt Blair takes the music to its campiest conclusions with tunes like “Ba Ba Ba (Life’s a Bitch)” and “Sugar Lips, Cinnamon Hips.” Like a time travel LP to the days when Marc Bolan’s T. Rex roamed the Earth, Blair speeds up the T. Rex glam style by a few dozen bpm on his 2013 release Banana Cream Dream. Like fellow Californian garage glammers Warm Soda and Hunx, Wyatt Blair is able to access a Dum Dum-sweet power-pop sound without losing an overall badass air.

While Wyatt Blair presents the amiable and over-the-top attitudes of garage rock, Corners aims in the opposite direction, playing understated riffs with a mischievous vibe. In the video for “Pressure,” the band, impeccably dressed, lays down their brooding outlook. As the music glides on a slippery surf guitar line, a quartet of skaters carve out a long hill and humiliate an innocuous boyfriend in front of his squeeze. Later, when the song’s eponymous refrain kicks in, the boy learns that the crew’s leader has stolen his girl. In a little under four minutes, “Pressure” proves the band’s other man/woman allure, a dark and sumptuous sound.

Mr. Elevator and the Brain Hotel

On one of the most stacked Monday night lineups to come through SA this year, the Lolipop Caravan’s most stacked band is undoubtedly Mr. Elevator and the Brain Hotel. With an enviable, two-tiered stage organ churning out the band’s psychedelic licks, Mr. Elevator is the only band on the bill without a guitar onstage.

Like the “Light My Fire,” Ray Manzarek-driven compositions in The Doors catalog, Mr. Elevator keep it tight when necessary, stretching out into groovin’ trips on command. With three-part melody tradeoffs, the walk-it-down chord flirtations of psychedelic McCartney and a dude who plays only the tambourine, the LA band is an exercise in shimmering control and release.