16 More Songs to Put on Your Halloween Playlist 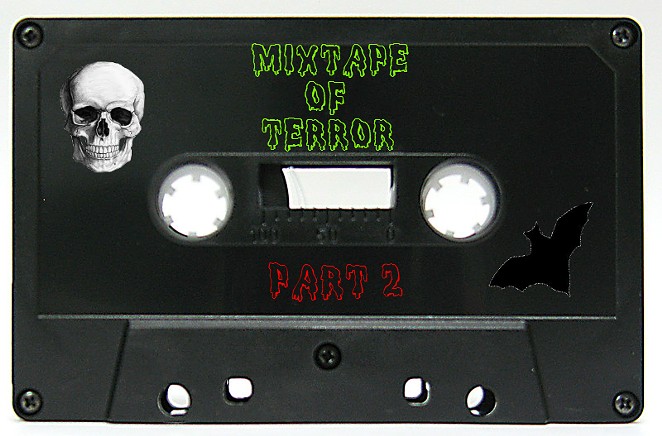 Halloween is rapidly approaching. Whether you’re feeling naughty enough to dress up as a sexy Pooh Bear looking for honey, or throwing on a basic white bed sheet, I salute you for trying. And to those going as that obscure costume literally no one will get, you’ll always be welcomed to my Halloween party. Here’s a sinisterly sweet mix tape to get the party poppin’. You can find our first Halloween playlist here.

Primus- “Candy Man”
This cover of the Willy Wonka classic is more appropriate for a cruise in a windowless white van with a goodie-toting stranger giving out “free” candy.

Pixies- “Is She Weird”
Vampires do seem to be cooler than the blood in their veins. They’re always full of swag, have bitchin’ cars and get crunk on plasma. It’s like a nonstop party (until the sun comes up.)

Black Lips- “Spidey’s Curse”
The inspiration behind "Spidey's Curse" was a sex-ed storybook where Spider-Man was molested as a youngster. Sadly, the subject matter goes way deeper than cool magic powers.

Babes in Toyland- “Blood”
In the words of Beavis and Butthead themselves:
Beavis: This sounds kinda like one of those records you get for Halloween, like, those sound effects records, like, with people screaming and stuff.”
Butthead: “Halloween is cool.”

CocoRosie- “Werewolf”
The wounds in "Werewolf" aren't caused by razor sharp claws, and it's not the kind of monster killed by silver bullets. This shit's deep.

Tegan and Sara- “Walking with a Ghost”
Whether you’re taking a stroll with spirits from the underworld or just moseying around with ghosts from the past, at least you know that you’re never alone.

Blondie- “Rapture”
The end of the world can seem so bleak sometimes, but Blondie's idea of the apocalypse sounds like a party.

R.E.M.- “Furry Happy Monsters”
If only R.E.M. made more cute and cuddly puns of their original songs for Sesame Street. Instead of rolling in his grave, Jim Henson would be dancing.

Charles Manson- “Eyes of a Dreamer”
Yes, it's the cult leader Charles Manson, not some guy who goes by his name for shock value. I know I'm going to hell for this, but Manson's music isn't terrible, especially coming from a crazed lunatic with "demon eyes."

Watkin Tudor Jones- “The Organ Grinder”
When the Organ Grinder comes to town everyone should go home, locks their doors and turn off all the lights. I don’t think the organ he’s grinding is a musical instrument. Intestines, anyone?

Frank Zappa – “Titties and Beer”
Although the song at first glance seems like a perfect country crossover hit about the simpler things in life, it's actually a far out tale of the devil and Zappa. You know you're eccentric when you name your daughter Diva Thin Muffin Pigeen, which is cool as hell in my book.

The White Stripes- "Little Ghost"
We've all had an Imaginary friend in our lives, whether it be during childhood or a case of temporary insanity.