Aural Pleasure: 'Primus and the Chocolate Factory with the Fungi Ensemble' 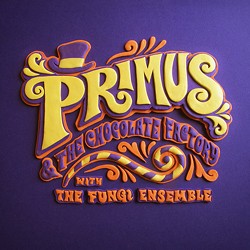 There always was something sinister lurking in the technicolor, sickly sweet musical Willy Wonka and the Chocolate Factory based on Roald Dahl children’s novel. Who can deny the nightmare-inducing, acid-laced tunnel, the chicken getting butchered or the scheming mastermind behind it all, the mad chocolatier Willy Wonka himself.

While there is an early ‘70s vibe on the Willy Wonka and the Chocolate Factory original score, its legacy is everlasting like the fabled gobstoppers. Primus and the Chocolate Factory with the Fungi Ensemble expose the darkness in the Wonka story that was obscured by the sugarcoated sentiments. The original lineup is intact with Bass slapper/lead singer/devotee Les Claypool, guitarist Larry LaLonde, and drummer Tim Alexander, as they completely gut out the 1971 soundtrack to their twisted content, replacing all hints of saccharine with a certain psychedelic whimsy that they’re fully capable of. It’s like Frank Zappa re-imagining Mary Poppins—total Chaos.

The revamping on the classic “Candy Man” sounds more like the theme song of an unsavory man in the windowless white van instead of a lighthearted romp. “Cheer up Charlie” no longer sounds like a picker upper on a doomed day or an encouraging light in the darkness. Instead, Claypool sings in an almost mocking rare falsetto accompanied with demented laughter. It’s anything but comforting. The meticulous clamoring and psycho funk guitar on fan favorite “Pure Imagination” and “Golden Ticket,” still manage to sound melodic amidst the maddening onslaught of the senses, both complete with dizzying marimba solos.

Claypool, like the homicidal confectioner, is the mastermind behind the insanity inducing world of his own Willy Wonka, crafting every hook and riff precisely as his demented mind commands, creating a trip through delicious insanity. Even though the snozberries don’t taste exactly like snozberries, the creativity that went into Primus’ vision brings on a whole new flavor of its own.