Aural Pleasure: Something Fiction's 'Trees in the Dark' 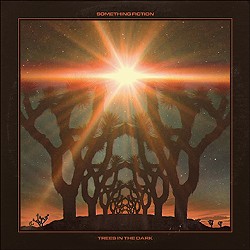 At nearly 13 minutes, local electro-mindbenders Something Fiction’s new single is long enough, even with only two songs, to qualify as an EP by many bands’ standards. It is, however, just this uncommon patience and hi-def attention to detail that make SF’s music so endlessly rewarding. Let’s consider these two offerings, which serve as an appetizer for an upcoming LP—“before Summer 2015” promises SF’s Matt Humble.

“Trees in the Dark”
Beginning with the mystical and meditative sound of rain falling on trees, this instrumental track is a wandering, tinkering, and organic journey through the nighttime forests of our primordial selves. Deceptively spare and led forward by droning sounds and noodling, maze-like guitar work, “Trees” is quintessential Something Fiction, in that it reveals itself to the listener anew with each spin.

“The Healer”
The B-side to the single, this track features the wavering but pretty vocals of SF lead-man Matt Humble, bemoaning the cruel illusion of separateness with the refrain “How are you and me in separate bodies / All I feel is unity.” Even at nearly eight minutes, the song, which features a masterful combination of acoustic and electronic instrumentation, doesn’t feel over-long in the least. Instead, “The Healer” shows a marked progression in the young band’s ability to craft sonic trances that encourage contemplation and mental drifting, while at the same time giving the listener plenty to come back to in terms of song structure, melody, and instrumental complexity.

SA Sound Something Fiction Trees in the Dark Video