I don’t like to get all personal. While I accept and appreciate the fact that folks have intensely individual relationships to, and experiences with, music—the transcendental beauty in what Nietzsche called “The Gay Science,” lies in its universality and timelessness. That being said, my father didn’t raise a music critic or philosopher, he raised a man. And a man deserves to say what he damn well pleases, from time to time. So, here it goes.

My dad, James Nuten Courtney, Jr., didn’t so much introduce me to Jerry Jeff Walker as leave him lying around for me to discover. Like clues to the core of my dad’s wild yet gentle soul, his old vinyl copies of Jerry Jeff Walker (1972), ¡Viva Terlingua! (1973) and The Best of Jerry Jeff Walker (1980) left a teenage me enraptured, imagining him, pre-kids, as a representative of, and participant in, a kind of freedom that had never even occurred to me before. This freedom, to exist beyond the bullshit boundaries of a society that measures value in terms of ‘usefulness,’ was something my dad never directly eluded to, but always struggled towards. And once I’d memorized the words of those shit-kickin’, drinking songs and sad, old ballads of the everyday, he and I would talk frequently about them and the endless blurry-happy memories which, for him, had become forever associated with them. Jerry Jeff was my way in—into my dad’s true nature, into the actual value of real human lives and stories, into the joy of imperfection, and ultimately, into the easygoing Texas Transcendentalism that still lies at the heart of my relationship to reality today.

On November 6, 2014, somewhere around 2pm, my dad—stuck in a fucking hospital bed—passed into the next world, after a short and futile battle with an aggressive form of lung cancer. As chance would have it, I secured an interview with Jerry Jeff, just nine days before dad's material liberation. We talked briefly about it, and a wave of deep satisfaction crossed his face, probably imagining the first chords of some too-long night in the foggy past. He grinned and said—his speech severely limited by a series of strokes—that the interview op was "Neat. Real neat." Which wasn't a snide dismissal, but, for him, a legitimate and longtime expression of being tickled, in the mystical sense.

Would I find, in conversing with this old roughneck troubadour, some sublime and wise sum of my father's existence? I was in that irrational, sorrow-plus-searching frame of mind when I called Jerry Jeff. Confiding in him my father's and my story, albeit in brief, I found a surreal personal catharsis and an immediate dissolution of the typical 'professional' tone of the interview.

“It’s nice to know that your music can become truly personal to people, that it might go into the fabric of some people. That’s one of the things about Texas. When people want to get away and relax and make their heads clear up, they can sit around a campfire and hear songs that matter to them,” he mused. He offered no ham-handed condolences, but opened up and talked freely with me about things dear to him. We agreed that, as Billy Joe Shaver told me earlier this year, music is a powerful (and cheap!) form of therapy. “But God knows Billy Joe needs it more than me,” he chuckled.

A few more topics came up and faded, as we shot the proverbial shit. Then I asked about how the hell he’d gotten started playing music and writing songs in the first place. Like so many things he told me that afternoon, the story seemed natural and pure and truly indicative of a man content to let the power of the moment lead him where it may, all the while holding on to his own center.

“In the 50s in New York, when I was in high school, we did a lot of playing Everly Brothers and stuff like that, that people could sing along with. And most of the time you could remember the chorus, but you couldn’t remember all of the verses. So I could make up the verses to get us to the chorus again. It was all very simple, but that’s where it started. Then, lyrics started to get more meaty when the whole folk music scene got going in the late 50s and early 60s. I liked the fact of the stories that these songs would tell. That gave me the idea that these songs would be more fun to learn and [with my guitar skills] these were more things I could actually play. The simplicity still stuck with me though. There’s a kind of enlightenment in finding simpler ways to say the basic truths. Then, as a solo singer-songwriter, I’d cover these folk songs and start slipping in a few of my own.”

It was “a little while later” when he first got his stage name Jerry Jeff Walker—he was born Ronald Clyde Crosby. He got a job as a bartender in New Orleans using a fake ID with the name Jerry Farris on it. Later, when the owner asked him to play some songs to help entertain the patrons, and when he eventually started busking on the streets, he wanted to call himself Jeff Walker. People, however, had already begun to know him as Jeff. “So it was like, you can be Jerry Walker or Jerry Jeff Walker, but you can’t be just Jeff Walker. So I said 'OK, I’ll be Jerry Jeff Walker.' It's just another one of those things where you’re trying to take some control and there really is no control. And it’s just a name anyway,” he reflected, with an almost audible shrug of his shoulders.

Of his subsequent move to Austin and the musical growth that happened there, Jerry Jeff started to get to that philosophical place that I came into the interview hoping we’d get to.

“I was looking for a scene that I could be comfortable in and do my thing and it turned out that Austin was that place. Texans like to have their lives sung about and I liked to write stories, songs about how we were living, so it just worked out. A lot of people say I just came and looked at Texas and sang it back to itself. Sometimes you can dig into a scene and really see it better when you’re not in it. Anyway, it was good to be in a place where a guitar could be thought of as a way of life and not just a phase you’re going through. It’s just not like that everywhere.” 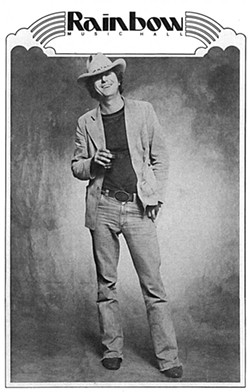 Still searching, I pressed him about those famous, almost mythical, times in the 70’s, when outlaw country music exploded and seemed to speak to a whole generation of folks who wanted to follow the whine of their own steel guitar. I told him I felt there was a sense, in his music and performances from the 70s, that he was either running from or chasing something. I wanted to know which it was, and whether or not he’d been successful. He partially eluded my question, but, in his answer, revealed that perhaps it was all just a lot simpler than I wanted to make it.

“Well… Because we were doing it ourselves, we felt there was no real boundary to it. Whatever we liked is what we recorded. Fun stuff and then real serious stuff all mixed in together. But we didn’t have to audition for anybody or pass any inspections, we just played. Maybe the boundary itself is what we were pushing and chasing. Everyone wanted to tell us we couldn’t make a living doing it our way, but we knew we could. We got on a roll and when you’re on your roll you push it as far as you can take it."

In his songs, particularly from those heady 70s days, you can hear this same peculiar and nonchalant confidence, this belief in the inherent truth and worthiness of one's innermost proclivities and ambitions. The stories he's told, again and again, with his best songs, are tales of grit, of sorrow, of bravado, of celebrating the everyday, of trusting oneself—they're yawning yarns of yearning and the eternal chase. I wanted to know how he always knew what to do and who to write about. He told me:

“Looking at the older people as a younger man, I was always trying to figure out who was happy and why. Because I always wanted to be someone who was that way—who had the twinkle in their eye, who told good stories, who was… happy on their own plane and for their own reasons.”

His attitude reminded me of Ralph Waldo Emerson’s heroically simple Transcendentalist decree that “Society everywhere is in conspiracy against the manhood of every one of its members ... Whoso would be a man, must be a nonconformist ... Nothing is at last sacred but the integrity of your own mind.” And as our interview neared its end, I found myself realizing that the grand quest for closure and truth and solace and perfection on which I had ostensibly embarked, was a mere mirage, warping my innocent grief into a wall of illogical and misdirected expectation. My father never did a thing but live simply, day to day, in a patient and easy state of permanent going with the flow. He found himself, and thus his happiness, in the love of his family and his earnest desire to help us—or anyone who needed it really—pick up the pieces wherever they fell. It’s no use looking for a program or being programmed, it’s best just to simply be.

With these thoughts in mind, I already knew how Jerry Jeff would end up answering my last question of the afternoon, but I asked it anyway. “How do you want to be remembered? What do you want to be your legacy?” I wondered. He paused, obviously a bit bored with the question and probably itching to go back to his day, and explained:

“Well… I don’t know. I don’t think I care about that. It’ll always just be someone else’s slant, so it don’t have much to do with me. I tried to write a good one, when I was writing about whatever it was I was writing about, and tried to be true to how I saw it. I never knew the rules so I just did what I wanted. It’s my personal love of picking and the songs I’ve written and projected onto the audience that matters, I guess.”

I suppose, after all, when you go looking for a window into the past or a crystal ball, you wind up with a mirror. When you go looking for a path to follow, you wind up learning to navigate yourself. And if my dad taught me one thing, it's the same thing we can all learn from the music of Jerry Jeff Walker: the struggle for happiness ain't a struggle at all, because it's not that big, but more like doodling yourself on top of eternity for a little while, chasing the boundary where it retreats for you.