6 Shows to See This Weekend

’Tis the season! And as we’re all a-bustle, anticipating the main event can leave us looking for opportunities to party off that seasonal anxiety. Friday’s Winter Fest can help with that. Plus, it’s a damn fine way to show returning Saytown ex-pats what badass music they’re missing out on the rest of the year. Featuring Crown’s chunky, prog-psych sounds, Islands & Tigers’ grunge-pop hymns to youth, Wolf Tone’s mathy and noisy gems, the dense shoegaze explorations of ants., the freak-out jams of The Freebies, and much more, this show will be packed with aural merry-making of the local variety. $5-$7, 7pm, The White Rabbit, 2410 N. St. Mary's, (210) 737-2221 -James Courtney

For a band producing heavy backbeat, spaced-out psychedelia, Cosmonauts has a geographical edge on the competition. Operating out of Fullerton, the band has the nearby rock ‘n’ roll mecca of Burger Records pushing their tapes and LPs on the parishes of American psych communities. (Ironically, the garage hotspot of Burger is located in a Southern California strip mall.) On last year’s Persona Non Grata, the quartet dropped 10 tracks of isolated, droning riffs and upbeat haze on Burger wax. While the hometown label is on board, Cosmonauts has also attracted the attention of Austin’s Reverberation Appreciation Society, the lysergic label that dropped the band’s “Lazerbeam” seven-inch. Fellow members of the RAS include Holy Wave, a like-minded Austin quintet whose 2014 LP Relax also saw some distribution from Burger (seems to be a pattern). With DJ Proper Yarn and the Fillmore West worshipers Creatura. $10-$12, 9pm, The Korova, 107 E Martin, (210) 995-7229 -Matt Stieb 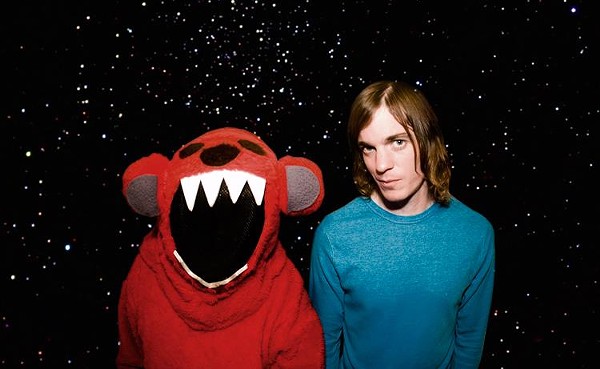 The monthly Electronic Exhibition allows producers a space to showcase their work outside of the usual venues of SoundCloud and stoned bedrooms. Saturday evening features Polysynth Fusion, working the early electric instrument of the theremin into the mix of keyboard and live production. Contrary to expectation, Reaganometry is not a form of math done with a jelly bean abacus. the project of Austin's Reagan VanMatre, Reaganometry infuses eight-bit beats with rhythmic vocal samples. With Inflatable Robot, Ohh Yea. $3, 10pm, Hi-Tones, 621 East Dewey, (210) 573-6220

Deck out your ugly sweater with tinsel, Christmas tree lights, feather boas and whatever your junk drawer has to offer to get $2 dollars off the door price. In keeping the theme of giving and welfare, the event will be running a drive to collect travel-sized personal hygiene items (like toothpaste, tooth brushes, soap and deodorant) for an SA based homeless program. Third place winners in the Current’s 2014 Music Awards for Best New Artist and finalist in Gorilla Music’s ongoing San Antonio Battle of the Bands contest, the Happy Campers are an effective collage of folksy styles, with a blast of violin for extra oomph. Containing the beauty and grace of a Beethoven composition and a pinch of Tim Burton-esque whimsy married with rockin’ guitar and bass, Moonglow is an eclectic gem. Headliners Octahedron have a lot to look forward to after placing second in the Texas Unsigned Artists Competition and placing third in the Current's Music Awards for best Indie Rock Band. Formed in 2013, Octahedron and their winning brand of optimistic indie can only bloom from here. Invision Love's big brassy sound (courtesy of a Euphonium, Trumpet and Tenor Saxophone) coupled with smooth indie pop vocals provides a unique listening experience. With Denton pop band Velvet Army. $8-$10, 7pm, Jack's Bar, 3030 Thousand Oaks, (210) 494-2309   -Shannon Sweet

The eccentric Tex Pop museum celebrates the end of the year with music from Garrett T. Capps and Mike Ryan Coyotes. The show will also feature tunes from Phil Luna and Jason Treviño, who put out the Roots in the Shadows of San Antonio comp this year, documenting their vision of music in Central Texas. Luna and Trevino will close with a jam featuring a few artist from the compilation. Donations welcomed, 2pm, Tex Pop, 1017 E Mulberry, (210) 792-1312