A Q&A with Jad Fair of Half Japanese 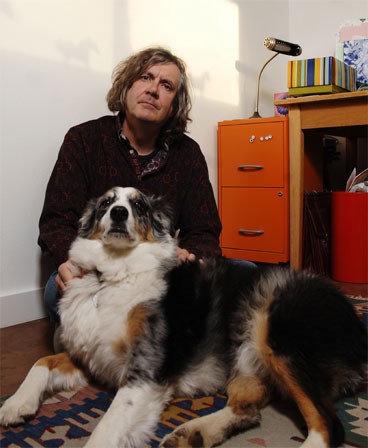 Jad Fair, the charming and spirited Austin-based front man of lo-fi alternative rock band Half Japanese, has just released a highly anticipated HJ album Overjoyed. It's music in its purest form, untainted by pretentiousness with Fair always wearing his heart on his sleeve and singing about the simple joys in life, like monsters and love. Fair’s trademark is an unplugged electric guitar and an enthusiasm for music and art. He is also renowned for the art of paper cutting, with his art shown in galleries from Austin all the way to Japan. You can check out his art on his website.

Formed in 1974 alongside his brother David Fair, Half Japanese recorded their masterpiece of noise and raw punk fury '80's Half Gentlemen/Not Beasts, a triple album and critical darling of music publications such as Pitchfork media. (The site gave the album a 9.2 out of 10 rating.) Fair has released 14 Half Japanese albums and 11 solo albums along with numerous collaborations with indie favorites Yo La Tengo, Teenage Fanclub, Daniel Johnston and many other acclaimed artist. Half Japanese was invited to perform at  2012's All Tomorrow's Parties curated by Jeff Mangum of Neutral Milk Hotel along with being an opening act for the NMH reunion tour.

The brothers Fair are the subject of the 2009 documentary “Half Japanese: The Band That Would Be King” directed by Jeff Feuerzeig, who went onto direct the Sundance winning documentary "The Devil and Daniel Johnston.” Johnston, another cult Austin musician/artist and creator of the beloved "Hi, How are you" mural in Austin, has collaborated with Fair on two records It’s Spooky and Lucky Sperms: Somewhat Humorous, both the stuff that lo-fi lover’s dream of.

Half Japanese has a slew of many talented admirers, always ready to sing praise of the band’s quirky punk rock. Among the Half Japanese junkies are Moe Tucker (The Velvet Underground), Lee Ranaldo (Sonic Youth), Peter Buck (R.E.M.) Penn Jillette (Penn and Teller) among with many other devotees.

As an opening act alongside the Breeders on a leg of Nirvana’s In Utero tour, Half Japanese was a favorite of late singer/guitarist Kurt Cobain, who was found wearing their band shirt on the last day of his life. The band’s album We Are They Who Ache with Amorous Love was sandwiched between the Beatles and the Butthole Surfers on a list of Cobain’s top 50 favorite albums.

Fair sat down with the Current to talk about his music career.

What is your fondest moment in your career so far?

The first show that my brother David and I did as Half Japanese was at Franklin and Marshall College in Lancaster Pennsylvania. It was a music festival which was running late. At 2:30 we were told that there wouldn't be time for us to play. I asked if we could play for 15 minutes and was told we could. I had never played drums at a show before and didn't know that I should put something heavy in front of the drums. The drums kept moving as I played and by the last song the whole set fell off the stage, and David smashed his guitar. The audience response was great. Almost everyone there stood in line to get our autographs. The person in charge was upset because David put a hole in the stage, but when you invite a punk band to play stuff happens.

Why did you take up the paper cutting art form?

Half Japanese was touring a lot, and I wanted to have something to do in the van. I tried drawing, but my hand wasn't steady. I found that I can have a steady hand with scissors. It's a good art form for a traveling artist. It's easy to fit in a suitcase and supplies are inexpensive.

Did you enjoy your collaboration with Daniel Johnston on It’s Spooky?

Daniel is a major talent. I can't say that it was easy to record with him, but it certainly was worth it. I was in charge of recording the album. It was a challenge because Daniel seldom wants to do more than a couple takes of a song. He wants to keep it fresh. That's great, but with the first take I was focused on mic placement and recording levels so it was important to work quickly and have it ready for me to join in on the second take. Most of the songs were done in two takes.

What album of yours would you recommend to a new generation interested in your music?

I'm real found of the Strobe Talbot album "Let's Born to Rock!" It has a nature feel to it. It was recorded 10 years ago and the label that was going to release it went out of business before its release. It will come out soon on Joyful Noise Recordings with new mixes by John Dieterich (Deerhoof). John did a great job of mixing and mastering it.

Do you still stay in touch with Daniel Johnston?

I don't see him often. I had few shows last year with him in France. Norman Blake (Teenage Fanclub) and I had a tour of Spain and one in Japan playing Daniel's songs. Daniel is such a fine song writer. It was fun playing his songs.

Was touring with Nirvana a pleasant experience? Did you receive a warm welcome from Nirvana fans?

Nirvana always played well. It was a kick to be able to do the shows with them. At the first show we played some fast songs and some slow ones. Every fast song got a good response, and every slow one bombed. After that we only played fast songs and it was fine. It was funny how I found out about the tour. I was reading an interview Kurt did with Spin Magazine and in the interview he said that Half Japanese would be the opening band. I called my agent and she told me that she just received a call from Nirvana's manager asking if we would do it. 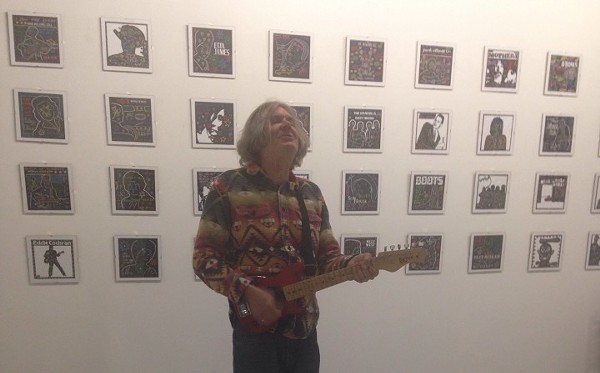 Is there any significance to the name Half Japanese?

We chose the name by chance. We had two hats with words written on slips of paper. We picked the word "Half" from the first hat and "Japan" from the second hat. We thought Half Japanese sounded better

Who or what is your biggest art and music inspiration?

For art my biggest influence is my brother David, and for music it would be The Modern Lovers and The Shaggs. I don't sound like them and don't make any attempt to, but the influence is there.

If you had to choose making art or music, which would you prefer?

Most of the musicians and artists I know need to have a second job to get by. I'm lucky that I can make some money from both.
If I had to choose I'd go with art because I can do it at home. For me to make a living off of music I would need to tour a lot. I try to keep the touring down to just 2 or 3 weeks each year.

What made you settle in Austin Texas?

My wife was living in Austin, and I moved here to be with her. It's such a fine city for art and music. I also like the weather. It's hot in the summer, but the winter is so much better than up north.

If you could collaborate with any musician dead or alive, who would you choose and why?

I have a lot of things coming up. In December I'll have a new album that I did with Norman Blake (Teenage Fanclub), and I'll have an art exhibition in NY, NY with Daniel Smith (Danielson) at International Arts Movement. In March I'll have an exhibition in Tokyo at Hiromart Gallery. Half Japanese is working on an album. We don't have a release date yet. My brother David and I have a new album recorded which should be released in the Spring on Joyful Noise Recordings. I'm working on an album with a French band (HIFIKLUB). We haven't set a release date yet.