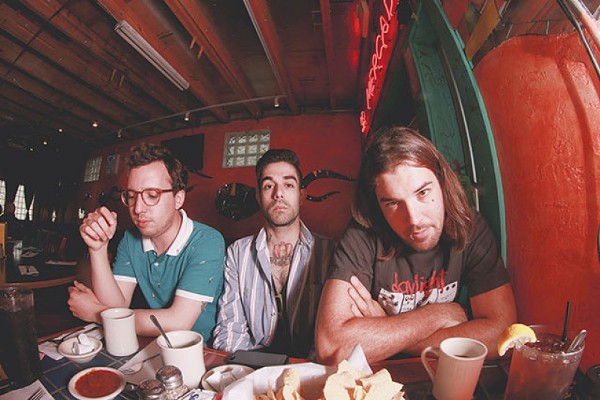 Like most years, 2014 saw the release of a ton of great music from San Antonio. We are blessed to live in a city with rich and incredibly diverse threads of musical thought and feeling. Here are the ten songs that, for me, seemed the most interesting and the most fulfilling—in other words, these are the ten SA songs that mattered to me most this year. (Songs are in no particular order.)

Chimalli, "Exactly / Exactamente" (from TXAMX)
This track sounds like a Sunday afternoon at Brack, gettin' philosophical about the bullshit with some chicken en la parrilla. A little English, a little Spanish, a touch of comino, the breeze, and a whole lotta soul.


Flower Jesus, "Sunset Smile" (from Cosmic American Music)
While most of its psych contemporaries keep sifting through 60's riffs and surf vibes, Flower Jesus embodies the truly expansive nature of psychedelic music, extending it here to what is, basically, a stretched out, slowed down, and mildly deconstructed piece of indie pop. It's pretty and it's woozy and it sounds nothing like Cali.


White Elefant, "City Crown" (from Nights & Weekends)
The pinnacle of White Elefant's all-around righteous debut LP, “City Crown” is an eviscerating song about the general fakeness at large, taking varied forms and wearing you down in myriad ways. Lead singer and songwriter Josh Mathis' deadpan delivery dampens the emotional weight of the song, while the violent lurches and stops suggest a deeper seething.


Advance Cassette, "Slow Down" (from Plain View)
With 90's nostalgia in full swing, it's not hard to imagine that there are tons of bands like Advance Cassette out there— jamming Nirvana, Weezer, and early Pumpkins for inspiration and feeling rad and retro as fuck—but most of them won't ever make a song as catchy and fully realized as “Slow Down.”


Mr. Composition, "Expendable" (from Graffiti the Mind)
Even while it expresses the chilling notion that, to those in power, the rest of us are of no consequence; “Expendable,” from the excellent Graffitti the Mind LP, gains power in that recognition. It's a smart hip-hop song with a hypnotic track from Ruler Why and Mr. Composition straight up rapping his heart out.


Third Root, "Unified" (from Revolutionary Theme Music)
A socialista's call to arms of sorts, “Unified” is my favorite track off of one of SA's best hip-hop records of the year. With an altered and smudged cumbia sample at its core, this exquisitely bumpin' song is an ear worm with a deep message of hope and worthy struggle.


Ants, "Swarmin" (from Ant)
From the opening drums of this track, which begins Ants swell debut release, you can tell you're in for an immersive experience. Like a swarm, this raw and cagey shoegaze gem seems to surround you on all sides.


Vetter Kids, "All My Friends Keep Moving to Seattle" (from III)
Ok, so nobody I give a shit about has ever moved to Seattle. However, any song that laments folks ditching San Antonio for hipper pastures is punk as fuck. Plus, the fuzzed-out bliss of this track is what first got me hooked on the Vetter Kids' medicine.