Aural Pleasure: Ants' 'Is That All It Takes to Make a Breakfast Cereal?' and 'Lazer Rifle Goat Hammer' 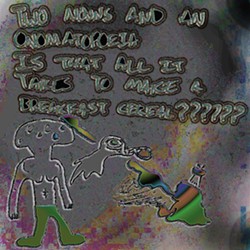 Without warning, local shit-fi shoegaze outfit Ants put out two wild and unruly projects late this week. Both efforts find the group pushing the sonic envelope much further than on its righteous 2014 debut Ant.

The first of the two releases, the breakfast-based jam session Two Nouns And An Onomatopoeia Is That All It Takes to Make a Breakfast Cereal?, started out as an absurd conversation between band members and became a wordless deconstruction of the shoegaze sound, dissecting the wall of sound approach into a hearty, fibrous, drum and fuzz exploration. The three tracks, "Cinnamon," "Toast" and "Crunch," are delightfully flippant and surprisingly engrossing. If this is the sound of Ants fucking around, who could ever wish they'd get serious?

Endless experimental, free form, sludge-gaze that warps your senses, jiggles your giblets and would probably scare the shit out of your mother. The music here—all 35 minutes of it crammed into two tracks—is even more outlandish, grating and nonsensical than the single's name, but that's what makes it so glorious. The only lyrics on the whole thing, which come right at the beginning of “LRG,” will surely change your life:

“Inflorescent brain breeds seaforthianum stalks creeping vulgares sweep thru meadows and ... walk stalk then interlock the chains in my brain with the shit cut cocaine that's lame insane get on the love train mayne”

Do yourself a favor and grab both of these projects over at antsantsants.com.

SA Sound Ants Is That All It Takes to Make a Breakfast Cereal? Lazer Rifle Goat Hammer Fuck Megaton Video