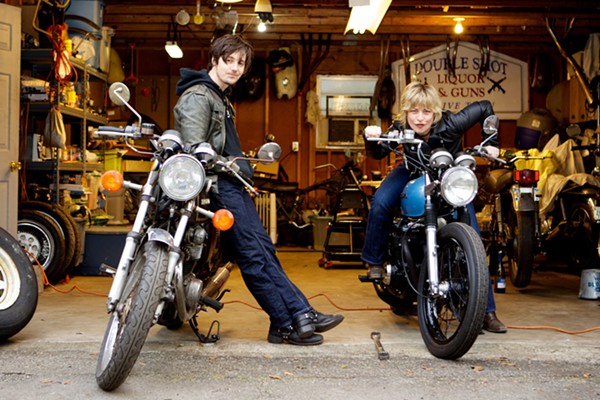 She’s from Nashville by way of the Mississippi delta, and he’s from Charleston by way of Denver. She brings the soul; he brings the rock, and they meet on the fertile pastures of country-leaning folk music. Husband and wife duo Cary Ann Hearst and Michael Trent, known together as Shovels & Rope, make joyful and soulful music that is a masterful mish-mash of Americana/southern styles. Playing at Sam's Burger Joint on Monday night, the pair treated the crowd to a 21-song set, rife with movement, humor and emotion, which served as a reminder of why they have quickly become one of the hottest alt-country acts around.

[Related: Shovels & Rope Wed Folk and Rock, and Each Other, in Marital Music]

The twosome opened the evening with their best and most famous song, a surreal, stomping and sprawling tale of the beginning of their love and musical collaboration, "Birmingham" (from 2012’s O’ Be Joyful). With Hearst on guitar and Trent on the drums, they delivered a rousing and inspiring performance of the hit that put them on the proverbial map, showcasing the depth and breadth of both their talent and loving kinship. Launching into the jaunty folk hoedown “1200 Miles,” they kept their focus on love and longing. It’s remarkable how well this song — off the band’s self-titled debut LP — manages to, like many Shovels & Rope songs, address the topic of love without coming off as cliché or veering into starry-eyed sap. Lines like “I learned to live with the consequence / Of hanging my heart on your barbed-wire fence,” show real grit and determination in the face of love’s terrifying vulnerability.

A few songs later, the pair tickled the crowd with the night’s first new song, the infectious, Elvis-like, country/old school rock and roll ditty “Coping Mechanism,” off of 2014’s diverse and endlessly delightful Swimmin’ Time LP. Next, the pair methodically and enthusiastically rolled through “Keeper,” the well-crafted story song about a defiant young love, and the lusty, vamping and primal blues-rocker “Tickin’ Bomb.”

After a quick tune up — “Because we’re professionals,” Hearst laughed — the couple played my personal favorite new track “The Devil is All Around,” a twangy and sauntering clap-along that looks at temptation through a nebulous mix of metaphor and confession. After a gorgeously unhinged rendition of the redemptive and sultry toe-tapper “O’ Be Joyful,” the intensity of Swimmin’ Time standout “Stono River Blues” gave way to a cheek-to-cheek, dual guitar version of “Save the World,” a loving song about our power to change and become, and the relatively crawling ballad “Pinned,” a solid multi-leveled tale of loss and dependency.

The night’s only cover, a positively jarring rendition of the Barbara Lynn-penned and Freddy Fender-popularized soul number “You’ll Lose a Good Thing,” struck a deep romantic chord. It was quite a touching moment when, immediately following the song, Hearst proclaimed “You could make a baby to that song,” while glaring, half hungrily and half expectantly, at her partner.

The last pre-encore song of the evening was the rowdy and Dionysian ode to rock and roll “Hail Hail,” delivered with bravado and fire to spare. It’s a song that is indicative of Shovels & Rope’s generally tendency to wan to get loud and messy — a tendency that consistently keeps their music fresh, surprising and arresting, avoiding the great black hole of blandness that Americana acts can occasionally be prone to slide into. As the duo winsomely closed their two-song encore with "Kemba's Got The Cabbage Moth Blues," a boot scootin’ front porch jam with an auctioneer style delivery, not a body in the house could still the urge to dance. It was the perfect exuberant conclusion to an evening of song that went through all of the emotions, ran the gamut of Americana stories and derivations, and left us all a bit lighter than should be legal on a Monday night.