6 Shows To See This Weekend

January 29, 2015 at 8:37 AM
comment
Thursday, January 29
Tortuganónima, Sunrise and Ammunition


Thursday, January 29
You Blew It! 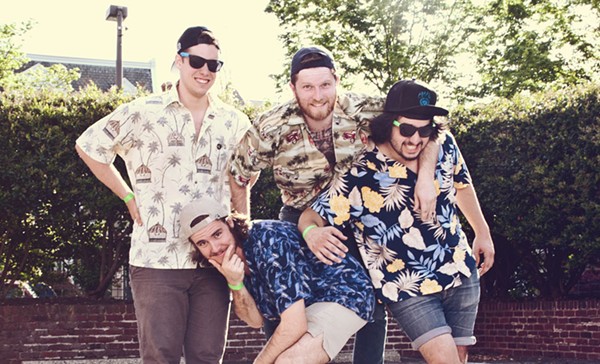 From Orlando, You Blew It! is one of several gems on the Top Shelf label’s roster. Founded in Boston, but recently relocated to San Diego, the label seems to have taken the best elements of ’90s pop-punk, bottled them, let them age high above the well-quality bands and brought them back out with new life and complex taste. On a recent Top Shelf split with Fake Problems, You Blew It! maintains a lo-fi edge, retaining the grittiness that keeps the verve in the heavily trodden genre of pop-punk. With Tiny Moving Parts, Roswell Kids, Fader Friend. $12, 6pm, Tequila Room, 1305 E Houston, (210) 698-2856 — Matt Stieb

NPR once gave SA songstress Nina Diaz some impressive cred as “one of the two or three most exciting, scary-good vocalists in rock today.” The praise rings true if you cross-reference the video of Diaz singing “Rebirth,” one of the few tunes Diaz has recorded in hi-fi since the hiatus from Girl in a Coma. As the band drops into orchestrated hits, Diaz sings of a former lover, her eyes wild with a frightening intensity and her voice scaling octaves with ease. Gaining momentum with a few well-received gigs towards the end of last year (including an inauguration of the Tobin Center’s Riverwalk Plaza), we’re looking forward to what the new year holds for SA’s comatic star. Denton’s Sarah Jaffe plays with rich textures in her orchestral indie rock arrangements, though her strong songwriting is just as arresting in acoustic form. $10-$50, 8pm, Sam’s Burger Joint, 330 E Grayson, (210) 223-2830 — Matt Stieb

There’s a pervasive sense of restlessness conveyed in the heavy motions of Samuel Edmonson’s bass and the wiry vocals of singer/guitarist Stefan Scott that lends Advance Cassette’s 2014 EP Plain View an air of tense immediacy unlike many bands can accomplish. On “One Eyed Neal,” the final track of Crown’s debut LP Are These the Good Days?, the trio sets up to ride out on some surf rock, but transition to a massive slow-burner to light fire to the album’s end. SA musical polyglot Marcus Rubio is just as comfortable rocking deconstructionist tape loop catastrophes as he is shredding through guitar and banjo pop. With bassist Josh Borchardt (Crown, Bright Like the Sun) drummer Kory Cook (The Boom, Dark Planes) and guitarist/vocalist Mark Anthony Smith (Creatura), Mockingbird Express’s improvisational chops will leave your jaw thoroughly dropped. $5, 9pm, The Ten Eleven, 1011 Avenue B, (210) 320-9080 — James Courtney, Matt Stieb

It’s a tricky tightrope that Islands & Tigers walk, celebrating their musical heroes, yet trying to maintain a unique and fresh identity as a band. But, as much as some of the group’s songs might call to mind The Strokes or Harlem Shakes or Weezer, it is, upon closer examination, just a passing resemblance. Islands & Tigers are their own talented band. SA Trio Wolf Tone's newly released track "Wax Wings" finds the indie rockers transitioning into post-hardcore, complete with an angsty spoken word verse. With Portland's Miss Massive Snowflake. $5-$7, 9pm, The Raven Hookah Lounge, 1255 SW Loop 410, (210) 673-3650 — James Courtney, Shannon Sweet

The Grasshopper Lies Heavy’s recent All Sadness, Grinning into Flow serves a master class in long droning riffs, expansive textures and the importance of badass amps. Made up of emcee Yooserp and producer P.S. Aspects, Wholly Vible creates music at the unexplored and fertile intersection of trip-hop and noise rap. SKNKVR’s most important instrument is the contact microphone, a small pickup that captures the sound of vibrations within objects. With the mic as his guide, he turns anchor chains and scrap metal into musical textures, like John Cage in an industrial park. With Hypersleep, Mothman, Grandpa Lies Again, Moths. $5, 8pm, The Ten Eleven, 1101 Avenue B, (210) 320-9080 — Matt Stieb