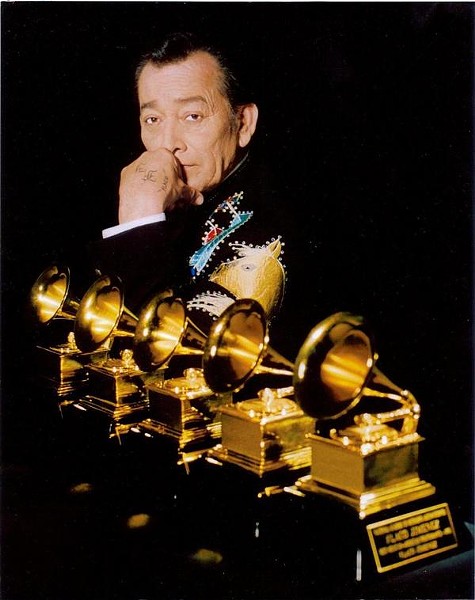 To help celebrate Flaco Jiménez's recent Lifetime Achievement Grammy, this week's Throwback takes us to a live recording of "El Mojado Sin Licencia" in 1975. Recorded in Austin (note the John Trevino for City Council banner), Jiménez and the band tell the irreverent story, roughly translated as "The Wetback Without a License."

With a gold-tooth grin, Jiménez sings of a Mexican immigrant who loses his car and bride-to-be trying to make a trip from Laredo to San Antonio. For us mono-lingual tejano fans, the video kindly provides subtitles. As the bassist riffs the polka rhythm, Jiménez tears up the button accordion, losing himself in the solo sections. When the verses come in, he returns quickly from the trance to deliver the tale.

Born in 1939 in San Antonio, Jiménez's long career on the Hohner accordion included cross-over recordings with Bob Dylan, the Rolling Stones, Dr. John and Ry Cooder among others. These sessions boosted his claim for a lifetime Grammy, though the tejano expressed here is the backbone of the accordionist's South Texas career.