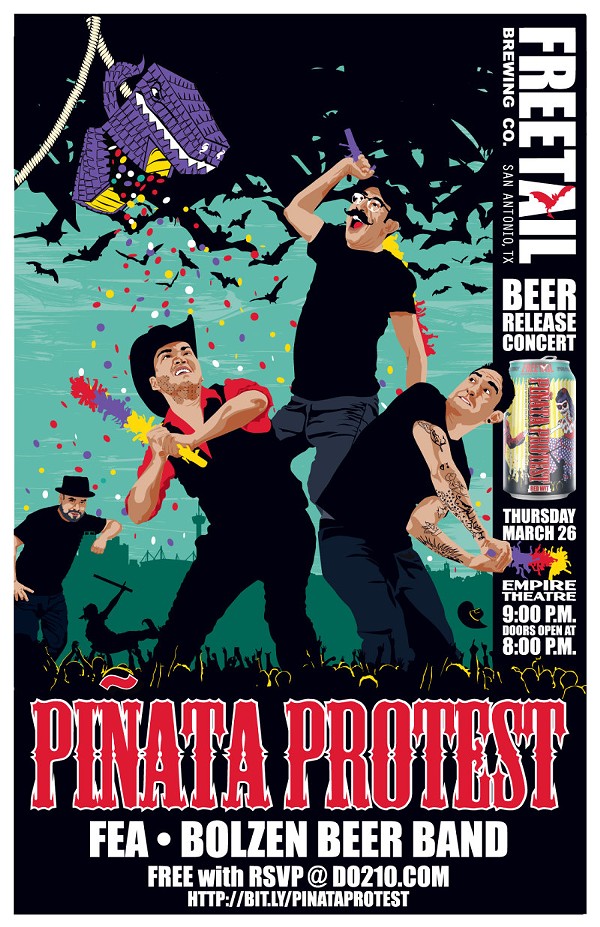 The promised collaboration between Freetail Brewery and Tex-Mex punks Piñata Protest now has a release date. On March 26 at the Empire Theatre, Freetail celebrates the release of the Piñata Protest Red Wit beer with a performance by the self-described "mojado punks," FEA and the Bolzen Beer Band. RSVP for free at Do210.

"We wanted to bring together a sense of place, San Antonio flavor and culture," headbrewer Jason Davis tells the Current. "The band was all about it and we brain-stormed recipe and ingredient ideas, and they tasted some test batches. It also has lime juice and a hint of salt."

The brew gets its red hue from "caramel malt and a dash of roast malt" and contains one-pound of ancho chiles per barrel for additional attitude.

Active since ’09, Piñata Protest released their best effort yet in 2013 with the El Valiente EP, containing 19 minutes of fierce punk and two-step accordion rhythms. FEA began from the cooled ashes of Girl In A Coma, with Jenn Alva and Phanie Diaz taking the hiatus as an opportunity to put out vicious Chicana punk. From Lincoln, Nebraska, the Bolzen Beer Band lives for party-friendly polka punk. Like a distant Germanic cousin to Piñata Protest, the Bolzen Beer Band rides the backbone of the oompah polka rhythm, bringing irreverent glee to their musical heritage.