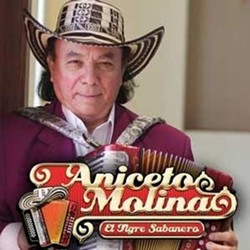 Famed accordionist and Aniceto Molina died yesterday at the age of 76. After being hospitalized in February for respiratory problems, Molina died due to a bacterial infection in his lungs.

Born in El Campano, Córdoba, Colombia in 1939, Molina began playing the accordion at the age of 12. He quickly took to the cumbia rhythm, mining the triplet beat for incredible squeezebox riffs. In 1973, the 34-year-old singer and instrumentalist moved to Mexico City, where he established a recording career with his band Los Sabaneros.

In 1984, Molina moved to San Antonio, setting up shop in a city quite fond of his instrument. In addition to his popularity in San Antonio, Columbia and Mexico, Molina had a particularly strong following in El Salvador.