Day two of Maverick Music Fest brought early rain and bayou-thick humidity to La Villita. But it couldn't displace the excitement for the bulk of the fest — the only independent music festival of its kind in San Antonio. 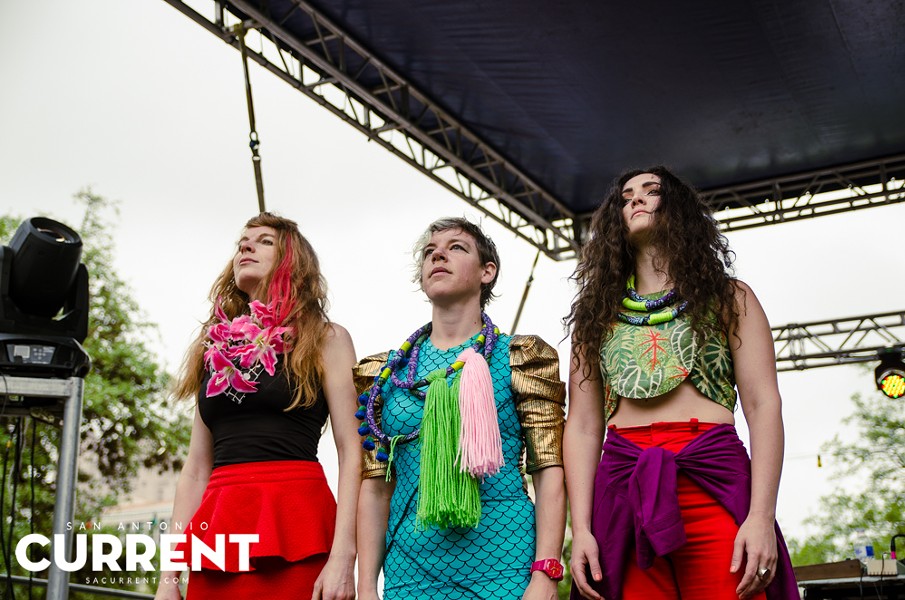 Merril Garbus, performing as the exhaustively-stylized tUnE-yArDs, is one of the few musicians in indie rock doing chido things with world music, without the foul of appropriation or corniness. Grounded by a deep funk in the bass, Garbus cares for polyrhythm and performance art, busting into odd, all-band dances and bouncing, rubber band rhythms.

That's not to say it's hoity-toity stuff. tUnE-yArDs is music of real emotion, with heavy thoughts packed into those polyrhythms and sky-scraping melodies."I look good in debt!" she shouts on "Real Thing." Already winking, the song tries a more cutting criticism — "I come from the land of slaves, let's go Redskins, let's go Braves."

Laughing onstage, with the audience dancing in the puddles of an early afternoon rain, tUnE-yArDs' music is also a celebration. For Garbus, the human voice, in all its loops, yelps and range, is an instrument of art and an animal thing. "Oh my god, I use my lungs!" she howls, again on the revealing "Real Thing."

Indie poppers Best Coast hearkened back to the teenage days when you're alone with your lover on the beach —even if you aren't on a beach or never had a lover. When Best Coast broke out the signature sounds from their debut album Crazy for You, everybody was dancin' in the crowd with their hands to the sky. But despite the impact of Best Coast's best effort, tunes from their 2015 release California Nights still packed a wallop. After listening to the chill tunes of Best Coast, it's easy to imagine the crowd saving up for gas money for a trip to Port A. — Shannon Sweet

San Anto old-schoolers Big Drag are sort of a lost chapter in the city's rock 'n' roll history. The Taco Land heavyweights put out a strong, self-titled record in 1995, their only full length to come to fruition. But playing their first show in some time, the trio certainly fits into the garage rock chapter currently being written in SA.