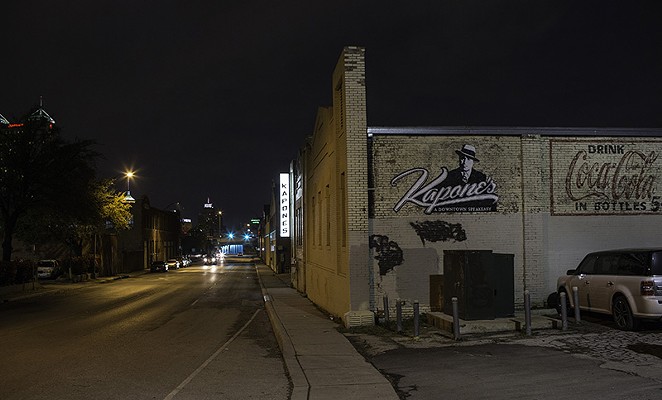 210 Kapone's issued an apology on Facebook following an alleged incident at Tuesday night's Mastodon concert. Attendees reported security guards pepper-sprayed a member of the crowd in order to diffuse the formation of a mosh pit. But things turned sour before the show began with reports of disorganization, long waits, poor ventilation and a failure to properly communicate the venue's no-moshing policy.

Fans allegedly waited outdoors in the rain for as much as two hours, due to doors opening at 7 p.m., rather than the 6 p.m. time published on show tickets. 210 Kapone's staff did not finish herding ticket holders into the venue until 8 p.m., after the first band started. Concertgoers were patted down by security, slowing down entry of the crowd.

The live music venue increased security in recent months following the murder of Pete L. Gonzales by a patron outside the club in late March. 210 Kapone's now hires off-duty San Antonio police officers to supplement its own internal security staff.

Online reports indicate the Mastodon concert was staffed with an allegedly over-zealous security team that worked to quell moshing at the heavy metal concert. Attendees allege people who attempted to mosh were forcefully thrown out by security. People present claim no signage was posted in the venue indicating the site's no-moshing policy and that a significant portion of the crowd was not told venue rules upon entry because the show already started.

"The police and crew were extremely over-zealous. They were throwing people out left and right for getting into the music ... not moshing, just enjoying the show," said one reviewer on 210 Kapone's Facebook page.

Things reportedly escalated when an off-duty SAPD officer allegedly pepper-sprayed a person in the middle of the packed crowd. Numerous reports state a number of nearby people were affected by the inflammatory irritant, however details vary wildly. The identity of the police officer and the pepper-sprayed concertgoer are not known at this time.

The venue's statement acknowledges the increase in security and reliance on off-duty police officers. Their Facebook post says staff security does not carry pepper spray and that the use of pepper spray as a means of crowd control is not allowed within the venue. claims management is investigating the matter and is asking assistance for anyone who has information regarding the alleged pepper spray incident. The San Antonio Current reached out to 210 Kapone's, however the voicemail box for the number published by the venue in its apology is full. 210 Kopone's responded to an email message, providing the Current with their already public statement, which you can read below.

To our valued customers-

It is with regret and sincere apologies that I address you on last night events. Our own internal security does not carry pepper spray nor are they authorized to use pepper spray on patrons or within our facility. Due to recent unfortunate events, we have chosen to increase security for the safety of all our patrons by supplementing our own internal security with additional hired external security guards. The number of individuals on the security teams depends on the event and number of patrons that will be attending, but I reiterate that It is with your safety in mind that this is done. We cannot speak as to the reason that the alleged pepper spraying occurred but we are looking further into this matter. Rest assured that it is not the policy of 210 Kapone's to pepper spray our patrons. Our goal is to provide the best experience possible and to earn your loyalty with each show we host for you. If you have additional information then I encourage you to call 210-210-279-9430 as we would like to hear from you. We are working hard to make each show better than the last. Any comments or concerns, then please call us and let us know what we can do better.


While there are a number of vocal critics online sharing their account on Facebook and Yelp — here is an account on the subreddit for Clutch, one of the night's opening acts — other social media postings indicate that fans enjoyed Mastodon's show, making no reference to the alleged pepper spray incident and aggressive security.