Courtney Love Has No Love For 'San Antonio Current' Writer: 'I Want To Slap Her' 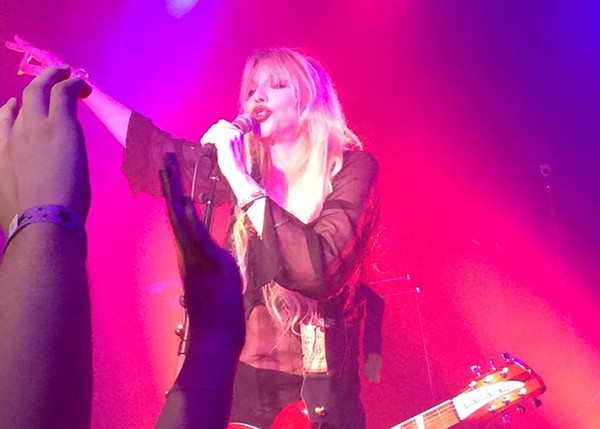 I had previously written about Courtney Love last week in preparation for her Friday show at the Paper Tiger, and the response has been divided between two camps: Courtney haters and Courtney devotees.

I was sandwiched between sweaty fans in the front row of the humid venue, dolled up in my black baby doll dress (reminiscent of the kinderwhore style that Love helped create) and shaking with anticipation for a glimpse the infamous Love. After being around 15 minutes late for her set, Love stalked onto the stage amidst the screams and cheers with a let’s-get-this-shit-over-with expression painted on her face. After bulldozing through “Plump,” Love addressed the audience, but instead of saying the typical, she said the unexpected.

If I recall correctly, she spewed “I’m so pissed off about what was written in the local publication. I don’t need some little feminist bitch to stand up for me. I have white, republican men to do that.” And to add insult to injury, she added “I want to slap her.” After her second song in the set “Miss World,” Love addressed the article again, continuing on how pissed off she was about it.

Just imagine what it must feel like to have a legend badmouth you about a twisted love letter you had written about her. To be completely honest, I didn’t expect her to read what I had written, let alone make an issue about it in front of her adoring fans. I felt so overwhelmed, and I could almost sense the tears well up in my eyes. It wasn’t until I had fled from the crowd into a safe, area, away from Love’s glare, that I felt the shame turn into a sick sort of power. Courtney fucking Love, lead singer of Hole, wife of Kurt Cobain, had found me significant enough to single me out and make me her victim, and that’s saying something considering her long list of enemies (Gwen Stefani, Madonna, Kathleen Hanna, Dave Grohl.)

Maybe it’s the narcissism kicking in, but I feel pretty honored. It’s not every day that a legend declares her lust to slap me. This is going on my resume/business card/ tombstone.