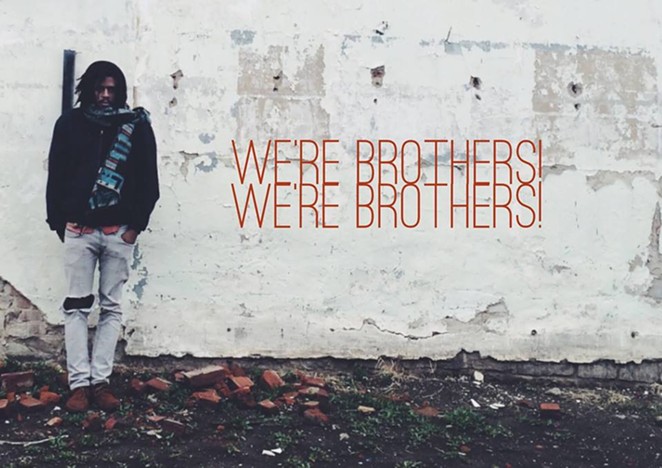 "Pretty good!" sings Nick Long, in an admission of content that chops up "Moon Shaped Heart (Never Again)." Treated with delay, his wail floats up high above the tune, overriding the message of vulnerability.

The rallying cry rang true on Saturday night, as Long debuted his new We're Brothers We're Brothers EP drowningburningsleepinglearning. With most of the city's shows rained out, Long's positivity sounded out against Ark-levels of downpour.

In his work with Lonely Horse, Long's guitar tone is a large and urgent thing, expanding into the space left by a two-man band. As We're Brothers We're Brothers, the texture of the guitar falls back, leaving athletic runs and crisp emotions bare for consumption.

On drowningburningsleepinglearning, the whole precipice of recording standards crumbles away, with all eight tracks changing in sound and fidelity — a sort of prize wheel of feeling and recording technique. The opener, "Please," hits with a cell-phone quality, giving it a field-recorded, Gunter hotel feel, then quickly gives way to the doubled vocals of "Thomas and Victor" and the delay-soaked and voice-throwing "Moon Shaped Heart."

Across the EP, the variance creates a sense of intimacy, like we're peering into different moments of Long's world — on the phone, in the studio, late at night all alone. It's an album in the original sense of the world, even if the length clamors for the status of EP.