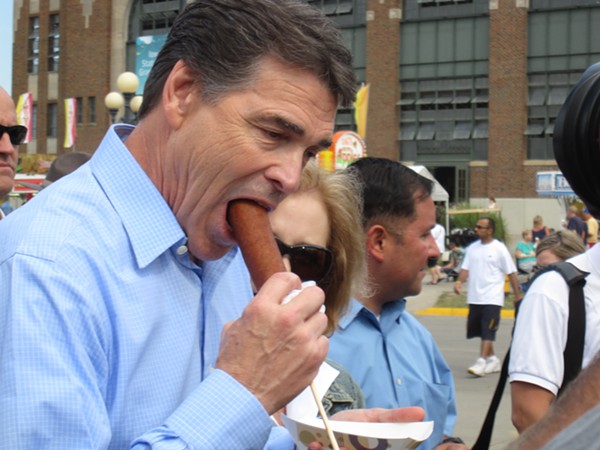 In a surprisingly self-aware move, Rick Perry chose a country-rap-rock song as the official tune of his 2016 campaign. I say self-aware, because Perry is the ballot equivalent of the single worst genre of all-time. I'd rather eat my own corndog vomit, spew it back up and eat it again on an indefinite loop of corn and dog than vote for Rick Perry or listen to the Florida Georgia Line ever again.

There's a long tradition of presidential hopefuls choosing godawful or misinterpreted songs for their campaigns. In 2008, Rudy Giuliani went with "Rudie Can't Fail" from notoriously anti-establishment Casbah-rockers The Clash. In 2012, Mitt Romney went with Kid Rock's "Born Free," though the only thing the two have in common is a deep and unquenchable lust for money. And, in 1996, in a beautiful moment of sloth, Bob Dole reworked Sam Moore's "Soul Man" into "Dole Man." (Unexpectedly, the song was a hit among men named Dale in banana costumes.)

With his announcement last week that he would run for president with glasses this time, Perry bought a reimagining of Colt Ford's "Answer To No One" as the soundtrack to an expensive trainwreck. Performed by the Pete Scobell Band, it features lines like, "Republican voter / Rick Perry supporter / Let's protect our border! / To heck with anyone who don't believe in the USA."

No offense to the lobotomized poet who put this thing together, but I can't respect a presidential candidate who's unwilling to swear at all times. This is election season, not happy hour at Chuck E. Cheese's.

The electric fiddle (or whatever) solo in here, might be the one moment of relief from the entire Perry campaign. But, oh God no, is that a "We Will Rock You" stomp-clap rip-off? Like Rick Perry in a boat or a Rick Perry mugshot, that screams another country-rap-rock verse. "Give me my right to vote / my right to tote / the weapon of my choice / don't suffer my voice."

That is not how enjambment works.