A Brief History of Lil B And The San Antonio Spurs 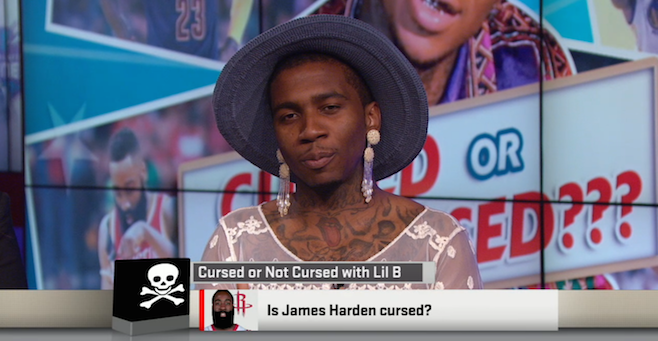 Over Twitter beef and concerns about dance move patents, Lil B's curses have become the most exciting sideshows of the NBA playoffs the past two years. From his pulpit at the top of the BasedWorld, Lil B has put his curses on James Harden and Kevin Durant, stymying their championship runs for the time being.

Last night, in a sunhat, dangling earrings and a sheer blouse, the Bay Area rapper played a game of "Cursed or Not Cursed" on ESPN's Sports Nation. For those not versed in the absurdist glory of Lil B, or his curses, the segment provides a sweet introduction.

For the Spurs, Lil B's voodoo intrusions in the NBA have largely been a passive benefit, helping Kawhi Leonard and Tim Duncan limit KD's offense in 2014. But the BasedGod and San Antonio have had a few digital run-ins.

shouts out to the San Antonio spurs orginization - Lil B

As a rapper dedicated to the Hoop Life, it shouldn't be a surprise that Lil B appreciates the team ball of the Spurs. But his love for forward Matt Bonner comes as an interesting choice. In a 2014 interview with Slam Magazine, Lil B said, "Yo, respect to Matt Bonner. Respect to the Spurs, they show a lot of love."

Still, as an aspiring baller on the outskirts of the D-leauge, it makes sense that Lil B appreciates the struggle of the Red Mamba.