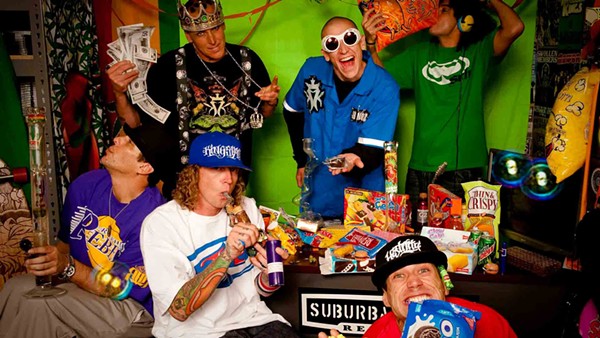 As labelmates of the Insane Clown Posse, Kottonmouth Kings have a built-in audience of Juggalos, the cult fanbase of ICP. But instead of focusing on “Miracles” and forming their own religion (seriously) like their Psychopathic Records brothers, Kottonmouth Kings focus all their energy on bong rips. One of their more popular songs, 2011’s “Cruzin’,” is hip-hop’s answer to Smash Mouth and Guy Fieri — all about chillaxing, California and having fun. Most songs follow the same formula. They’ve changed it up on their newest release, Krown Power, but are still obsessed with the same subject matter. Try a how-many-times-marijuana-is-mentioned smoking game; you’ll be incapacitated after the third song. With Blaze Ya Dead Homie, C4 & Nicky Gritts, Chucky Chuck, Marlon Asher. $22.50 - $27, 7pm, The Korova, 107 E Martin,  (210) 995-7229

Sweet and simple, heartfelt and honest, Crystal Yates is a Florida songstress with a knack for candid ballads on heartbreak and success. In her breakout single “Goodbye Letter,” Yates crafts a sincere get-a-move-on anthem for everyone who’s been burned in a bad relationship. “I’ll be leaving this town / I can do better,” sings Yates in her country-twanged songbird voice, leaving her past behind for the possibility of a brighter future. 9pm, 502 Bar, 502 Embassy Oaks, (210) 257-8125

As a master of making the kind of music that hot '80s babes and chickens are sacrificed to, Danzig takes the best aspects of hardcore punk, heavy metal and just overall bad-assness. Formed as a heavy metal supergroup after the disbandment of horror punk band Misfits, frontman Glenn Danzig and co. are still going strong with an evolving sound that is akin to 70's black Sabbath. With Pennywise, Cancer Bats. $35-$37, 8pm, Aztec Theatre, 201 E. Commerce, 210-760-2196