Live And Local: Daniel Johnston At The Paper Tiger 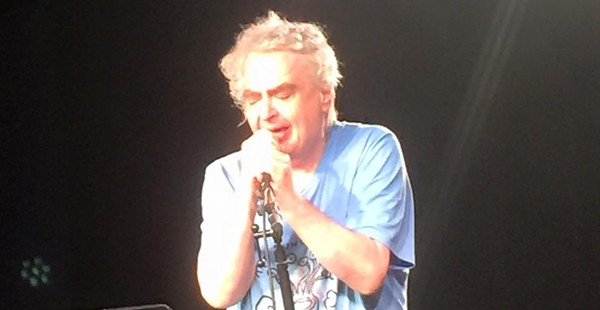 Like the love he lives for and the dreams he materializes, Daniel Johnston gave a piece of his heart to everyone at the Paper Tiger Thursday night.

The Daniel Johnston booth was the most happenin’ I’ve seen at a concert, every fan clamoring to take home a piece of the eccentric musician. Art books, signed prints, variations of the famous T-shirt made up the stand’s wares. I even had to re-buy my overworn “Hi, how are you” T-shirt, modeled after his ’83 album of the same name.

He would acknowledge the audience’s adoration from time to time, especially when girls would yell, “I love you, Daniel." But akin to Johnston’s early career, whether he was playing his heart out on his piano, chord organ or guitar solely to himself and his boom box, the now 54-year-old seemed to be in a world of his own, full of imagination that only he can inhabit.

As his fans were soaking in the fact that they were experiencing their hero in the flesh, it was obvious how loved he is. Besides the cheers, chants and clapping, the room was silent during the bulk of his performance. No one had to heart to talk over Johnston as he broke out fan favorites such as “Caper the Friendly Ghost,” "Don't Let The Sun Go Down On Your Grievances” and “Speeding Motorcycle,” all off of his classic fifth album Yip/Jump Music.

Although Johnston’s lyrics are consistently described as simplistic and sweet, there is an underlying depth in every lyric, every note. Even if he’s singing about the Beatles, his dream girl “Laurie,” to just being a rock ‘n’ roller, that tragic quality he’s been celebrated for is still there. But that’s not to say that everything Johnston writes is melancholy and depressing. There’s so much love and passion for what he’s devoted his life to, his music, and it’s amplified by his voice, once childlike, now deepened over time.

The tears flowed freely as Daniel Johnston came out for the encore performance of “True Love Will Find You in the End,” arguably his most recognizable song. This is the kind of song that only comes out once in a lifetime, its sincerity ringing volumes as Johnston, in his frail, quivering body, delivered what can only be called “magic.”