Live And Local: Mac Sabbath At The Korova 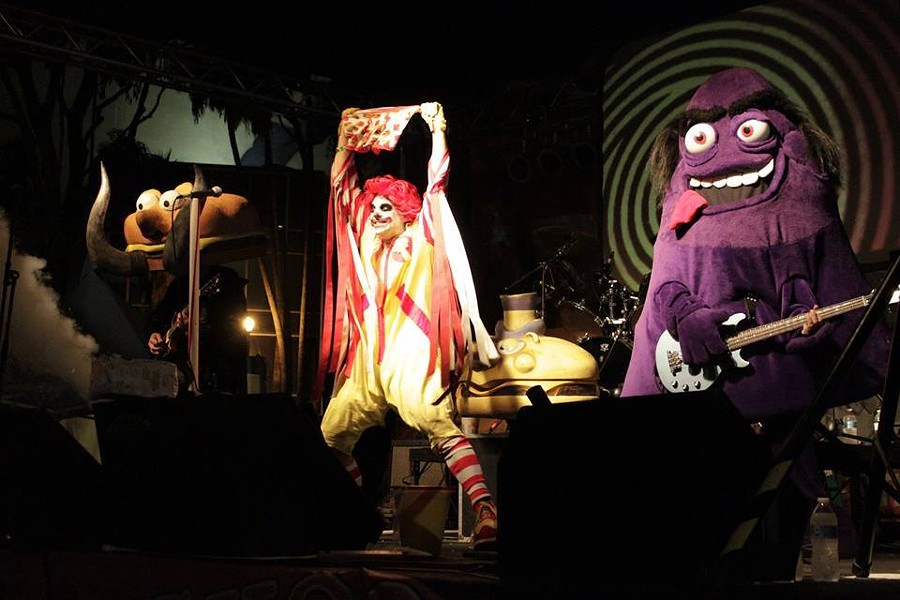 It seems only necessary for a Black Sabbath tribute band to trek to the Alamo City, given that Ozzy’s fall from grace way back in ’82 is still fuel for pissing-on-the-Alamo jokes, but Mac Sabbath ain't a typical cover band. Made up of frontman Ronald Osbourne, a demented clown that you probably won’t hire for your child’s fourth birthday party, guitar destroyer Slayer MacCheeze, a mammoth tusked, unbuttoned satin shirt rocking Satanist brother of politician Mayor MacCheese, Bassist Grimalice, an even more terrifying version of purple blob Grimace, and drummer Catburgler, a cross between the least-loved member of Kiss (Peter Criss) and the fast food convict Hamburglar, LA’s Mac Sabbath’s crew of rejected mascots rock harder than the playground’s ball pit. Mac Sabbath goes all the way and takes the parody to all new layers of hell.

With the anticipation skyrocketing like the number of hamburgers sold, the stage was obscured by a yellow and red striped curtain, only with Ronald McDonald heads glaring at the audience with their menacing laser eyes. Before the grand unveiling, a warped, distorted “Send in the Clowns” sung by Frank Sinatra played overhead to confused cheers. When the curtain dropped and “More Ribs” (a play on “War Pigs”) started, it was like the feeling when you finally get the happy meal toy you’ve always wanted.

The set was chocked-full of zingers, including Ronald pulling a giant straw out of his jumpsuit only to use it as a beer bong, cooking plastic hamburgers on his smoke-blasting machine grill and name dropping “drive thru metal” imitators throughout the set, such as “Twisted Sizzler,” Burger King Diamond,” To-Fu Fighters” and “Chick-fi-ACDC." The magnum opus was when Ronald, in tradition of Ozzy, ate a Big Mac made of one bat Pattie, special sauce, lettuce, cheese, pickles, onions, and a sesame seed bun.

Actually, despite all the McDonalds imagery, I don’t think you’ll find the band eating at the fast food joint. Mac Sabbath has a message, and it’s against the unhealthy, heart-clogging evils of processed food.

Hopefully, Mac Sabbath will follow McDonald’s lead of conquering the world one burger, err show at a time. It was Sabbath yummy Sabbath.