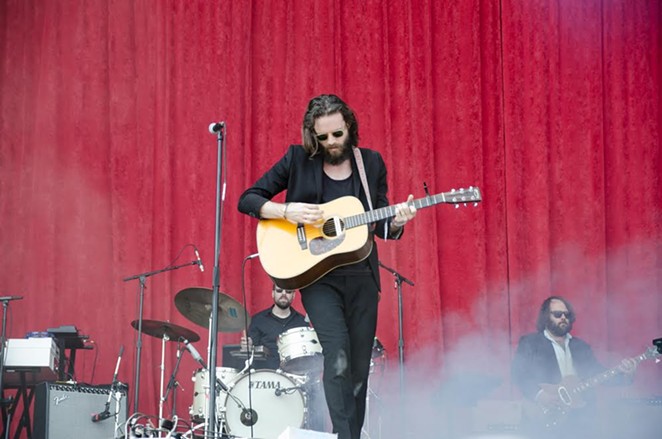 Josh Tillman slinks, almost shambles. He owns the stage, and much of the space surrounding it, for most of this set. He's constantly moving — on the stage, leaping on the drums, off the stages into the Platinum Viewing Area, into the crowd. Not only is he everywhere, he's giving it everything. He needs our love. He'll pull every drop.

The performance itself, including work from the outstanding new album, I Love You, Honeybear, and reaching back in places to 2012's Fear Fun proves how great these songs are live, how their storytelling lyrics dripping with sardonicism still translate when surrounded by others who feel just as cheeky. Even "True Affection," which sounds a bit out of place on Honeybear, sounds bouncier and more befitting live, especially to allow for dance breaks while wearing a $35 H&M suit that still looks good on him.

We know it's a $35 H&M suit because he told us, along with the importance of keeping one's energy up with plenty of illicit amphetamines (and you should take it from him, your health guru, he proclaimed) and about the ridiculousness of the Platinum Viewing Area, particularly how off-putting it is to have an upper echelon of people have a full pit to pass through, watching an act, and derisively wave it off as though the artist on stage can't see this. Eventually, Tillman poked fun at everything — the photographer lingering on stage past the three-song limit, the folks too attentive to their phones that they almost miss our hirsute antihero leaping at them from the stage, random passersby.

Near the end of the set, a helicopter flew too close overhead of the festival, sweeping through Zilker Park. It was one of those odd moments in the set where Tillman didn't comment on the absurdity, but had he not been busy performing, he probably would have said something. He probably would have leapt on that helicopter and sang a few bars while dangling from it, as well, if he could.

I was told this would be country music in a pure, artistic form. I was told this wouldn't be any bullshit. I was told there'd be craft here, that it'd suit those whose sensibilities go for musical depth. I was told right. This is the genre. There is that noticeable twang. The elements are here; Simpson's voice has everything about that pocket that we all know in country. Hell, the organ player is pretty damn mean. This whole band is, and when a band is this good, these songs can go on walks, exploring the musicianship that these guys exhibit. This feels like an Austin City Limits set, like this is what this festival, the show, and the organization was fashioned to present. People should see and hear this. It does everything right. For the uninitiated to the genre, it may be unclear if these songs are originals or standards, but they're certainly done so well that one may not be sure if it even matters.

As a solo artist, he only has three albums spread out over a decade. He epitomizes chill completely on each one. He could do this solo. He doesn't, thankfully. Such chill doesn't hold a festival. There are too many slow builds. But when he builds … look out. They're quiet builds, though, like rolling storms.

A week before, this tent filled out half this crowd, reportedly. Perhaps the desire for the more chill second weekend is the crowd González was looking for. His music and this tend make the murmur inevitable. It's what he does to try to break through it that makes all the difference. With this band, the music speaks for itself and if it breaks through, this crowd reaps the benefits. They were there for it, but not there for it, as festivals are wont to have. To González, that was fine, though. He's the epitomization of chill either way.

These guys are pros. They began with swelling, swelling into a bang, calling in the gloaming. They're pros because they've been around for over a decade. They're a long way off from Return to Cookie Mountain, even further from OK Calculator. Yet, they have total control of this crowd. These black guys are jamming a sea of white folk (as they often do) and everyone here actually doesn't seem to see color. The rock surpasses all, as people claim music is supposed to do all the time, yet here in this hour, such a thing comes to fruition.

This is an awesome act pulling from a deep bench, though their latest album from last year, SEEDS, has some jams, too. They're crowd pleasers. When the hit everyone knows and loves, "Wolf Like Me" rears its head, everyone expectedly loses their shit. Things go further when "Repetition" plays — a trombone appears, a dude in the crowd goes into a fit, then comes a tambourine. It's a set of pure satisfaction with a decade of experience to pull off such a task. Yeah, these guys are pros.