If there's one thing Maynard James Keenan is not particularly keen on (other than that pun) it's people bringing up his legendary alt-metal act Tool when he's trying to talk about his sophomoric comedy-rock troupe Puscifer, and with good reason. Though tracks on albums such as "'V' Is for Vagina" and "Conditions of My Parole" share a clear musical kinship to his previous heavy hitting bands Tool and maybe, especially, A Perfect Circle, Puscifer's raucous stage show — featuring a cast of characters like Major Douche and Peter Merkin — seems more heavily influenced by Keenan's time with performance art weirdos Green Jellÿ. The video for “Money Shot,” the title track for Puscifer's latest, features luchador masks and all the seriousness you might expect from a band that started life in a Mr. Show sketch. $34.50-$375, 7:30pm, Tobin Center, 100 Auditorium Circle, (210) 223-8624

Finally, a dance band that not only plays their own instruments (and they're not all drum machines and synthesizers) but doesn't sound like a rejected submission to Yo Gabba Gabba! I am a sucker for name-songs and "Debora" delivers, complete with pleading chorus/outro cries of "Deb-er-rah!" They've even got a  freestyle, hip-hop bridge that sounds just like The Material Girl or Deb(orah) Harry. With Them Are Us Too. $6, 9pm, Paper Tiger, 2410 N St Mary's St. 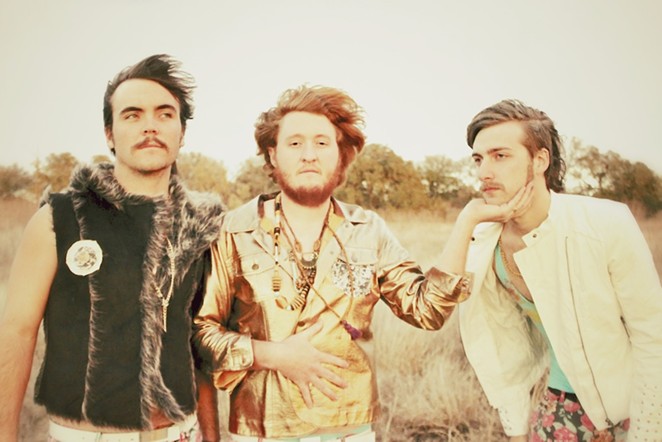 Get your rotten tomatoes ready for the dark-bro styling of limp Bizkit-fave, '01 omen of the forthcoming Nickelback cadre of rockers that have zero sex appeal, (unless you're Avril Lavigne) and registered Republican that forever cursed us with being subjected to "It's been awhile..." at the karaoke bar... but now he's "country."  $15-$30, 7pm, Cowboy's Dancehall, 3030 NE Loop 410, (210) 646-9378

After a grueling three-year citywide search for dependable passionate musicians, and along the way encountering countless flakes, “The Uprising” was formed in April 2011. Without Craigslist, none of this would have been possible. Thanks, Craig. They are really buff also, which is always a precarious position for a rocker that isn't Henry Rollins to be in. With Voracious and Donella Drive. $5, 9pm, Limelight, N St Mary's St, (210) 735-7775

Considered one of the greatest guitarists of American music and credited for reinventing the blues with his distinct razor-sharp style of guitar playing, Cray was inducted into the Blues Hall of Fame in 2011. $35, 8pm, Carver Community Cultural Center, 226 N Hackberry, (210) 207-7211

I am always reticent of groups that fall under the umbrella of what people call “americana.” Usually because it’s a bunch of white, Dylan disciples who sublimate their love for Neil Young and The Band with weak-kneed, naïve and, frankly, poorly-crafted attempts at classic American folk songs — too much coffee shop and not enough cotton gin; a touch too much Wilco or Union Station (there’s nothing wrong with Allison Krauss, but there’s only one), and not enough Charlie Feathers or Bill Monroe. As the blues, rock ‘n’ roll, hillbilly music, rhythm and blues, and country-western have been distilled through several decades of city dwellers and suburban latchkey YouTubers, it seems that high and lonesome, pure-prairie pining is harder and harder to come by. The Heartless Bastards have nestled that high and lonesome into their bosoms right next to their love of a vast, drawling, distorted guitar drive. Much like San Antonio’s Wild Blood, they take their knowledge of folk music and rather than duplicate the fingerpicking, three-part harmonies and fiddle licks, they incorporate the inevitable — expansive rock without a lot of roll. It is honest, straight and sincere, and as their craft, they have mastered it. With Slothrust. $15-$70, 9pm, Sam's Burger Joint, 330 E. Grayson St, (210) 223-2830

Ezra Charles has been fronting one of Houston's better known bands with his piano since the early eighties, winning annual reader's polls for best piano/keyboards seven times. With the end of an era thirty years ago Charles embarked on "The Story of Boogie Woogie", a show that runs about 2 hours wherein he performs many of his classic piano hits that define boogie woogie. He explains in great detail it's origin and how it spread worldwide. $20-$50, 3pm, Sam's Burger Joint, 330 E. Grayson St, (210) 223-2830