November 08, 2015 at 5:23 PM
comment
FunFunFun Fest has earned a reputation for bringing together nostalgic acts and reunions in hip-hop—Jurassic 5, Ice T, De La Soul - and this year - Wu-Tang Clan. But old-rap heads can only sustain a festival for so long. So it should come as no surprise that FFF Fest has always been invested in mixing the old in with the new. That’s why you see the ‘90s throwbacks of Wu-Tang Clan mixed with the new school rappers of Schoolboy Q, Rae Sremmurd, Shamir and Joey Bada$$. 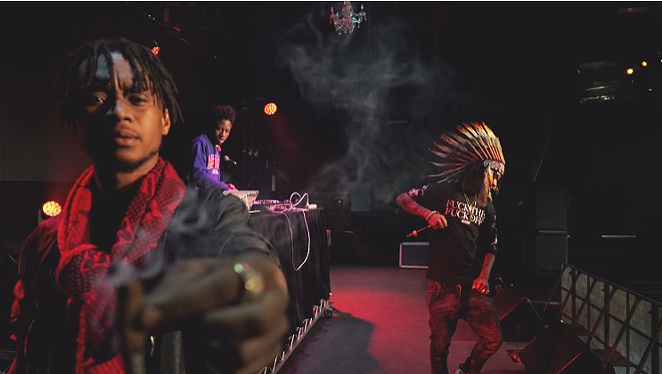 Rae Sremmurd seems like your unlikely rap duo. Thin, diminutive, and sporting short dreads, the brothers of Khalif “Swae Lee" and Aaquil “Slim Jimmy,” provide a breath of fresh air and are a stark antithesis to the normalized hyper-masculine stereotype in hip-hop. The duo are bound to draw comparisons to the precocious ‘90s good-vibe kids Kriss Kross, as their performance see saws back and forth between exuberant singing, double-timed rapping, or yelling squawked vocal jabs. They were quick to bring the party antics with the Nicki Minaj assisted “Throw Some Mo,” and the hyped “No Type.” Before ending with the party anthem of “No Flex Zone,” the duo introduced a quick plea to vote before launching into “Up Like Trump"

It’s been 18 months since L.A. rapper Schoolboy Q dropped Oxymoron, a compelling mix of introspective street narratives a la good kid m.A.A.d city and dizzy weed anthems. But one thing’s certain; he ‘s tired and ready to move on. “This is gonna be the last time I’m gonna play these old ass songs,” said an exasperated Q after hinting on releasing a new studio album. “I’m sick and tired of performing these songs, man.” Ironically, he then went to perform those tracks: “Collard Greens,” “Studio,” and “Hands on the Wheel,” flew high and then ended in an instant. Battling a cold, Q often stopped intermittently between songs to take a break. He even pummeled through a sing along of the blockbuster hit “m.A.A.d city,” but whether that was an effort to battle his cold and fill up time or to make a nod towards his Black Hippy comrade is questionable.

Shamir is definitely the oddball in this mix. While his genre-bending dancehall tunes that channel pop outliers like M.I.A. or FKA Twigs, and his ethereal, flamboyant flow bridge the worlds of hip-hop and dance together. In his album, Ratchet, Shamir finds power in the margins as his aesthetic— a black man making unapologetic contagion dance pop—reclaims the stigmatized roots of the queer history in black and house music. His underground hit “On the Regular,” proved that it’s been the catchiest thing people have been looking for since Azealia Banks “212.” But on the rainy day, he kept his spirits up as the singer turned 21 and received birthday wishes throughout his set. Songs like “Head in the Clouds,” with acid basslines and frenetic rococo synths, prove that there is freedom on the dancefloor. 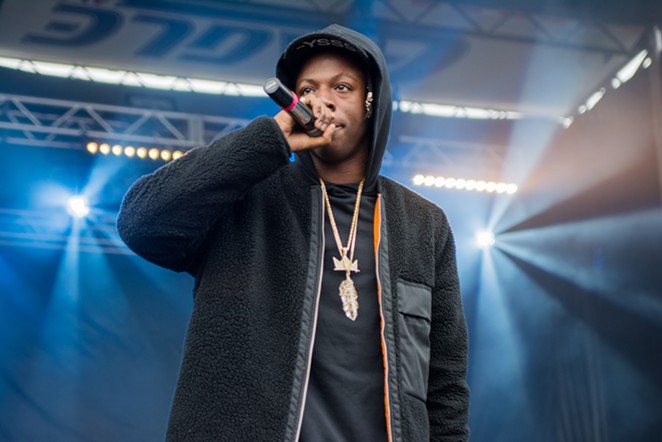 Joey Bada$$ is probably one of the most nostalgic rappers out now, preferring the soulful jazz leanings of ‘90s rap to the turn-up hard-hitters of the FM dial. “Let me take ‘em back to that 1999 shit one more time,” said Bada$$, to Static Selectah, his DJ and longtime collaborator. Whether it worked as a nod to his mixtape 1999 or was a plea to cue up tunes from the golden era of hip-hop; both worked. Songs like “Big Dusty,” and “C.R.E.A.M,” follow the same ethos of Nas and Mos Def with witty lyricism and intricate street tales of growing up in Brooklyn. Even at the end of the set, he wore a golden crown a fan from the crowd had given to him. A coronation to rap royalty? Perhaps, but only time will tell.

Remember the last time nearly every rock song had a guitar solo? Dave Navarro does. Jane’s Addiction’s performance on Saturday of Ritual de lo Habitual in its entirety invited us back to the year of 1990 where the band explored the bleaker, indulgent, and outlandish sides of Los Angeles. But what made that album so awesome was that in all its bombast, it still stepped away from the ‘80s hair metal cheese of Poison or Warrant that became a staple for the city a decade before.The album’s opener “Stop” kicked the set into gear, and while Perry’s vocals cut short in the mix, with Navarro’s rabid solos you could still hear the revving of the engine.

On songs like “No One’s Leaving” and “Ain’t No Right,” you could hear their eclectic influences- from the funk and soul of Sly and the Family Stone to the grit and the aggressive onslaught of Led Zeppelin. Their ubiquitous hit “Been Caught Stealing” had Farrell in an improvised scat-singing as the song caught the attention of the tween chin-scratchers with their parents. But the most memorable part of the night was earnest “Three Days.” Almost like the druggie, meandering journeys of Pink Floyd and the Doors, “Three Days,” was a psychotic trip that left the wild-eyed audience in a daze with ringing ears.