When Lauryn Hill rapped “Observe how a queen do,” from “Final Hour” last night, you couldn’t help but believe her as she stomped her feet and earnestly gestured herself in triumph. But the arc of her reign has always been a troubled one.

After the release of her critically acclaimed The Miseducation of Lauryn Hill, everything seemed to fall apart indicating that she was ill equipped to handle the mantle of pop-icon set upon her. Battling a lawsuit in 2001, a tumultuous relationship, a reputation as an inconsistent performer, and ultimately a charge for tax evasion, it seemed that Lauryn Hill had disappeared. So whether her performance was a fluke or a comeback in the making is still uncertain, but it was undoubtedly some form of sweet serendipity.

Serving as the centerpiece, a black and white love seat was surrounded by melting candles from which Ms. Hill would play a short but intimate set, starting with an unreleased track, “Conformed to Love,” and followed by her MTV Unplugged “Gotta Find A Piece of Mind.” Cradling an acoustic guitar, she delivered a moving rendition of “Mystery of Iniquity.” You could hear her tortured pain as she wailed, “I’m telling you all, it all falls down.” The set included dense arrangements and arguably some of her least accessible material, but proved to be a fitting
introduction to remind us, yet again, that she undeniably possesses one of the most vulnerable yet empowering voices in R&B and hip-hop.

Once the couch disappeared and the candles were blown, the set transitioned into the most anticipated part of the night including rearranged Fugees classics like “How Many Mics,” “Fu-Gee-La,” and “Ready or Not.” A Bob Marley medley of “Jammin,” “Is This Love,” and “Could You Be Loved,” soon followed. The stage was lit in yellow, red, and green, as the crowd sang in an incantatory chant to the posthumous tunes of the dreadlocked Rastafarian. And while she closed the set with “Everything,” and “Doo Wop (That Thing),” the highlight of the night was her cover of Nina Simone’s “Feeling Good.” From her deep, fiery voice, politically leaned lyricism, and complex career, Lauryn Hill makes the perfect candidate to cover Nina Simone and do it justice. “It’s a new dawn, it’s a new day, it’s a new life for me, and I’m feelin’ gooood,” sang an impassioned Hill. But the power and sheer vitality behind it
sounded like revelatory declaration not only to herself but also to her fans. Let’s just hope it’s true. 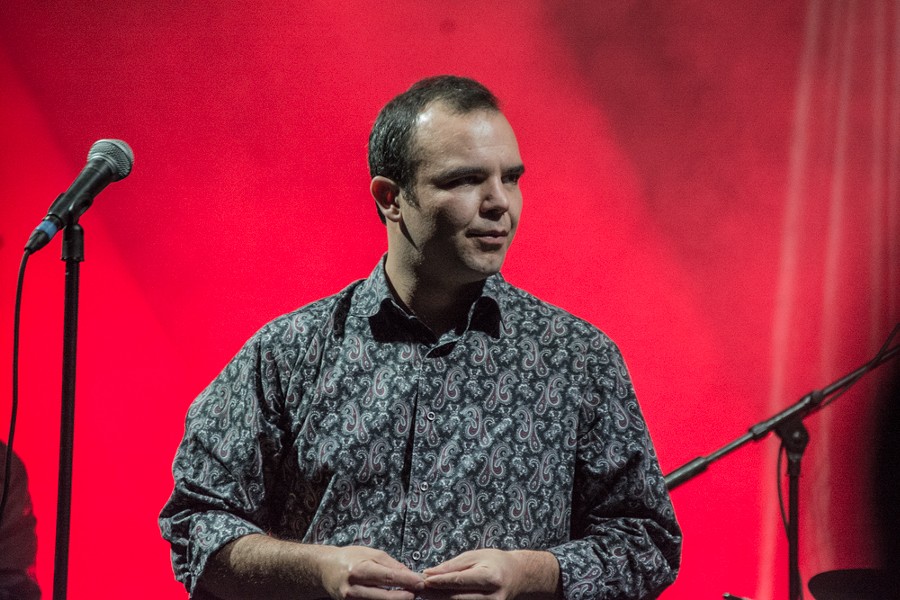 Future Islands worked really, really hard to get to where they are today. Nearly living in obscurity seven years and three albums in, the Baltimore outfit has finally reached some sort of ubiquitous status with their newest album Singles.

But, Austin has seen them grow from impassioned nobodies to lo-fi electro-pop ringleaders. “I feel like we’ve gone places together,” said vocalist Samuel Herring, echoing the same sentiment. “First time we were here, I think we only played to 25 people,” he said about their first show in Austin back in 2008. Three years later in 2011, they played an afternoon slot at the main stage at Fun Fun Fun. So, it was only fitting that on Sunday they played on the main stage again, but at a later slot, amidst their success.

And honestly, it was only a matter of time. Samuel Herring’s delivery ricocheted from heartbroken croons, feral growls, to vaporous whispers. His enigmatic and demanding presence could easily be compared to even the greatest frontmen like David Bowie and Iggy Pop. In their pop contagion “Seasons,” his gyrations received a collective swoon, while in “Spirit,” he slapped his face several times until falling to the floor like a manic chasing his thoughts. But his unhinged demeanor is an antithesis to the lyricism that seems impulsive and all too simple. “This is for the youngins’. Life is fucked up at times,” said Herring before launching into “Lighthouse,” where he actually sings, “You know what you know is better is brighter.” In their simplicity, lie honesty and an earnest zest that can resonate with anyone. There’s a redeeming and saving power to music, and Future Islands is a testament to that.

Chromeo’s performance on Sunday reminded me how hard it was to initially take them seriously. There was something about their kitschy coolness that came off as too cheesy and trendy. But somehow on Sunday, their roller rink retro pop seemed to vibe well with the audience, including myself.

Don’t get me wrong—their goofball act is still as strong as ever. The Canadian outfit still subscribes to that Hall and Oates polarity as “Dave 1” Macklovitch sported his usual leather jacket and black ray bans, while Patrick “P-Thugg" Gemayel donned his baggy pajama pants and snapback. They’re no more serious now than before, but this time everyone is laughing with them, not at them.

Chromeo is all about bringing the party vibes, and once the keytar from “Night By Night,” chimed in, the crowd became an untamed dance party with bodies swaying and jumping in inebriated confidence. Macklovitch claimed the dance floor with footloose footwork or Niles Rogers’ guitar licks as Gemayel manned the station comfortably behind the sexy-legged keyboards. Strobe lights flickered across the stage when they launched into “Sexy Socialite,” and closed the night with “Jealous,” as they stood in power stance holding the guitar and the bass like a showpiece. Chromeo shows no signs in changing their electro-dance aesthetic, and they probably shouldn’t - now that everyone has joined the party.