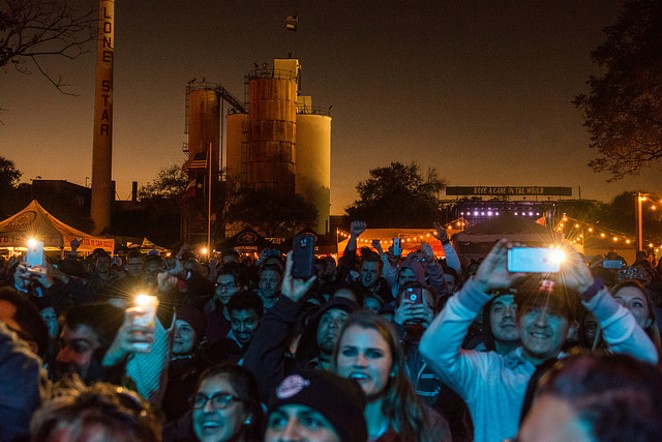 I understand that there are big plans to make the old Lone Star Brewery into a hub of commerce — a la The Pearl, but hopefully with a little of the Southside's spirit —but for now, the space has this charming post-apocalyptic vibe. While the buildings retain a bombed-out, badlands aesthetic, the old pond, in its half-full glory, boasts a filthy tarp covering.

These were my thoughts on walking up to the festival on our first arrival, the one where we brought our two year old with us, acting like it wouldn't be too cold, too windy and too rowdy for her. Fortunately, we were able to catch most of Nina Diaz' ferocious set before retreating to leave the little one with a babysitter, return in an Uber (so happy you're back!) and settle in for an evening of endless, quality beer and performances that took us back to the heady days of circa-2009 indie rock bliss.

And now, one day, deep into my old age and senility, I can explain to my daughter how I will never, ever forgive her for making me miss the motherfucking GZA.

Nina Diaz
Go ahead and call me treasonous if you want to, but Nina Diaz' solo project is becoming so crazy good that I'd almost rather see them play than Girl In a Coma. While GIAC has certainly paid its dues and become a national success on the wings of its inspired brand of alt-pop-punk, Diaz' and her band, especially in the live setting, beg adjectives like soaring, dynamic and even transcendent. On this occasion, Diaz and company really made the most out of a short set, dazzling the hometown crowd with tight execution and songs that beautifully toe the line between visceral and cerebral.

Tokyo Police Club
From the plaintive and dreamy first notes of set opener and Champ standout "Breakneck Speed," Tokyo Police Club put on, as they so often do, a veritable clinic in indie rock performance. Having seen TPC a few times before, I was surprised and pleased at the relatively new integration of keys into the band's sound. While taking a bit of edge off the group's crunchy and crystalline sound, the layers of keys, sparingly applied, added depth, texture and nuance. Drawing from material going all the way back to its excellent 2006 EP A Lesson in Crime, TPC pleased the crowd with a career-to-date spanning set. Also, points to vocalist/bassist David Monks for being, or at least seeming to be, totally jazzed on San Anto. 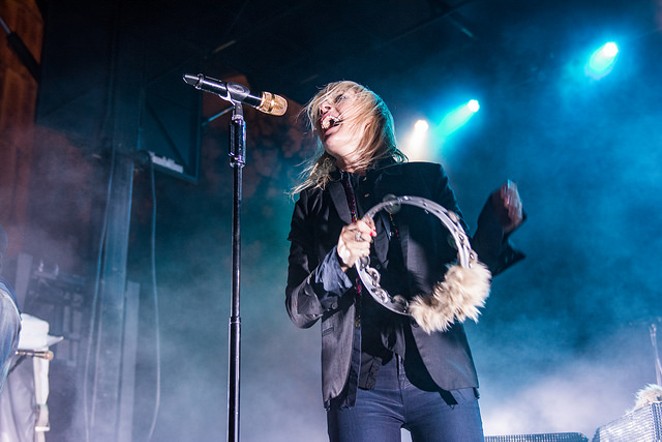 Metric
This was my first time seeing Metric and, to be honest, my first time really appreciating why the Canadian foursome has endeared itself so deeply to its legions of fans. When leading lady, all all around queen, Emily Haines took the stage in her android peacock costume/wearable art installation, it dawned on me that Metric is a band best appreciated in the live setting. This realization was wholly borne out by the music itself as well. While Metric's songs can feel a bit flat and one dimensional on record, at least to me, they became gigantic, melodramatic moments of sublime on Saturday night. The dystopian pop seemed perfectly fitted to the dilapidated setting as the band's jagged, max-fuzz riffs danced between new wave synths a-plenty like ghosts in a machine. It was all very Gothic and intoxicating.

The Beer
The act that most thoroughly rocked this motley and massive crowd — the real MVP, if you will — was the beer. Who the hell knew that you could get so glazed and phased, so quick on 2-ounce shots of beer? It was a stroke of genius by the organizers of this event to have the focus be as much on the craft beer as on the music. In this way, Untapped truly felt like a beer and music festival, rather than a music festival that merely served beer. And, while we may have lost count of just how many of those tiny beer shots we enjoyed, and largely forgotten which were ultimately our favorites (I do remember loving that Abita Wrought Iron IPA), it was really a treat being able to try so many great beers in one evening.