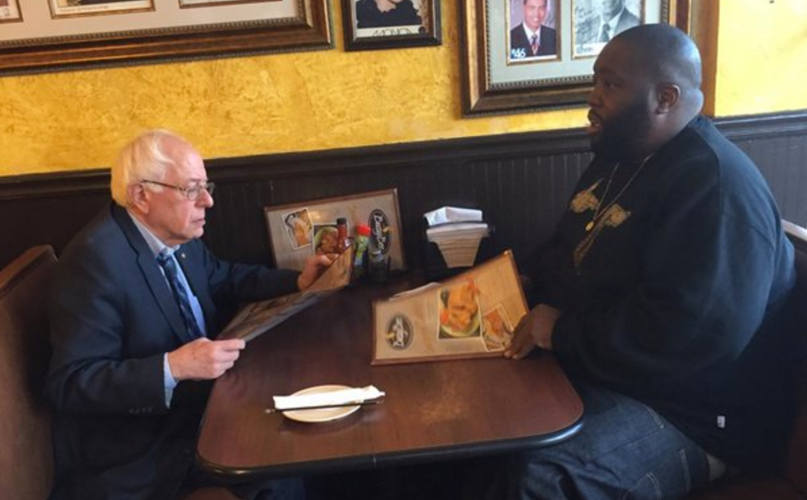 Killer Mike, who made his mark on mainstream hip-hop on Outkast's 2000 LP Stankonia, specifically "Snappin and Trappin," and on the so fresh, so clean Grammy-winning track "The Whole World," recently gave an introductory speech for presidential candidate Bernie Sanders in Atlanta.

In 2008 Mike signed to T.I.'s Grand Hustle Records and after being produced by fellow MC El-P, on his album R.A.P. Music, the duo went on to form a partnership and release two records for free entitled Run the Jewels and Run the Jewels 2.

Killer Mike, born Mike Render, is also a businessman, having opened a barber shop in Atlanta, his hometown, entitled "Graffitis SWAG," which he envisions as a community common ground operating to "lift up men in the community who are out of work and help move them toward sustainable, lifelong careers" and give his employees "opportunity for real economic elevation." Mike envisions opening 150 of the shops all across the U.S.

Along with being a considerable force within the hip-hop game, Killer Mike is also an outspoken activist and critic of institutional racism, police brutality, and the systemic injustices that plague the United States. "I feel I have to be politically active and I have to be a credit to my race."

When 18-year-old Michael Brown was gunned down by a white officer in Ferguson, Missouri in 2014 for stealing a box of cigars, Mike stated, ""I'm appalled that regular Americans are apathetic. I'm appalled that people choose to use the word 'thug' as a code word for 'nigger.' I'm appalled at everyday citizens... When will we, as an American constituency, tell our politicians enough's enough? Enough mayors supporting murderous police departments. Enough police chiefs having to give excuses for murderous police officers."

In his hometown of Atlanta, Mike got to make a stump speech for the only candidate that he says he has ever believed in. Dig it: