Christian Scott at the Tobin: A Review 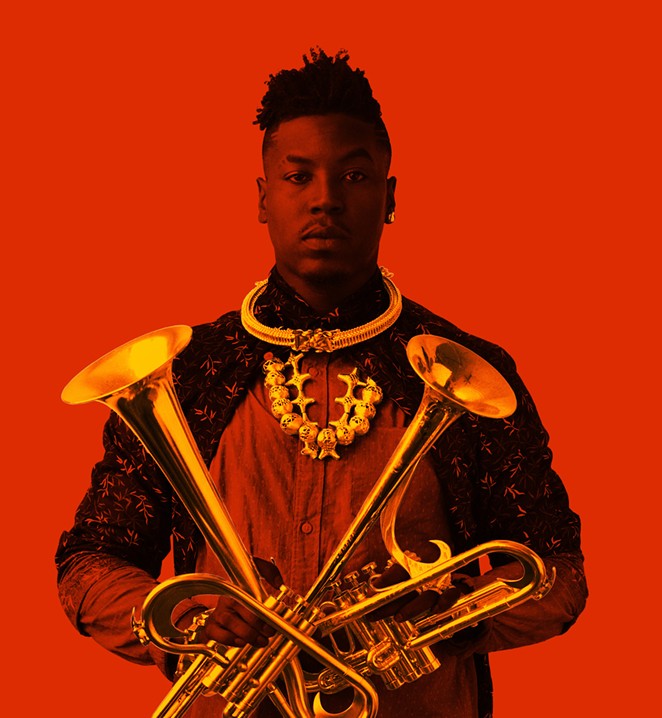 Don't call what Christian Scott and his dectet – although last night they were operating as a flexible sextet – a jazz ensemble. Not only did the group, particularly drummer Corey Fonville, not "swing" once, preferring to utilize traditional hip-hop beats, although sparingly, along with a pantheon of global rhythms, but the ensemble even avoided the typical jazz rhythmic requisite on a Miles Davis tune, only one of two non-Scott penned compositions in the set.

The group opened with a bright, somber-sunrise take on Radiohead's "Videotape." I had goosebumps right out of the gate, due to the familiarity of the tune as well as Scott's slides up and down the register of his boutique "trumpet." He riffed on Thom Yorke's exposition on the afterlife as pianist Lawrence Fields held down the recurring theme, a repetitive single measure phrase. The simplicity of the composition allowed for the ensemble to stretch their improvisation chops.

This style of what Scott calls "stretch music" – also the name of his most recent record – is the framework on which he builds most of the compositions played by the group. A recurring harmonic theme, often as little as two repeating chords played in interesting time signatures, setting the groundwork for flutist Elena Pinderhughes, bassist Max Moran, Fields, Fonville, Scott and guitarist Dominick Minix to solo over.

Another particularly rewarding nuance of the young group, Scott being the eldest at 32, is their age. Favoring stylish oxford shirts buttoned to the collar and untucked and sneakers, the freshness of the group is a welcome departure from the stuffy assumptions of the Sunday-best genre. In short, in his music and overall aesthetic, Scott is making moves. Dragging jazz into the 21st century and away from the tired stereotypes of the "just a bunch of random notes and noise" conceptions of the ignorant philistine.

Scott's setlist included Yorke's "Videotape;" the Scott-composed "Sunrise in Beijing," which has an incredible backstory in which Scott, on tour with legendary jazz pianist McCoy Tyner, realizes that in China, due to the pollution, citizens never see the sunrise; "Twin," a piece composed for and about Scott's twin brother Kiel; "West of the West," a colorful ode to the terrible-ness of LA; a Miles Davis tune, whose name I could not catch but was right at home in Scott's astute interpretation and featured some of pianist Fields' most impressive keys work; and "Last Chieftain," a piece about the forebears of Black American Indians, of which Scott is a direct descendant.

All in all, it was a terrific, humorous presentation of some of the finest, most articulate young voices in "jazz." Plenty of SMH-ing and LOL-ing.