Top Four Songs From the Holiest Mixtape of 2015: Pope Francis' Wake Up! 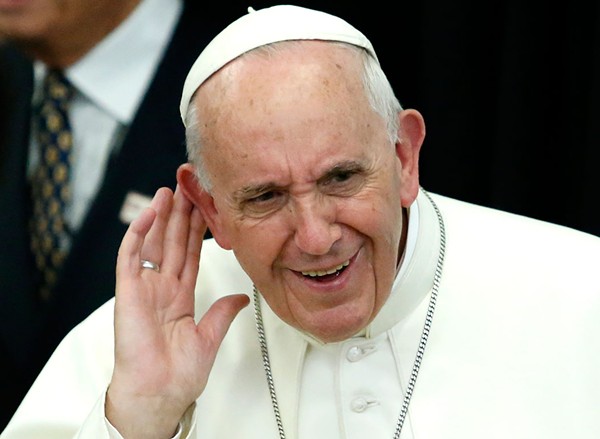 In late November, Pope Francis - the cool pope- released a progressive rock record entitled Wake up!, a sprawling epic of a concept album.  With a wide range of styles (Latin, soft rock, hymns and outdated '80s rock), instruments (check out them bitchin' guitar solos) and languages (Italian, Spanish, English and Portuguese), Pope Francis is probably the closest thing to a rock God we'll ever have.

But don't expect to see Frank armed with a cherry-red six-string surrounded by babes in nun habits, lasers and fog machines as he shreds his way to the Rock 'n' Roll Hall of Fame and the cover of Rolling Stone wearing only a gold cross. His vocal style is more of a Lou Reed spoken word with a Spanish accent than a shrill Geddy Lee screech, but with guest singers and composers, who needs wailing falsetto from the holiest of men?

Instead of recycling rock opera concepts from the past 50 years, Pope Francis goes one step further- nearly 2,000 years further- to Christianity, of course. Because there's more than one language spoken on the album, the concept isn't as easy to understand as the Who's Tommy or Pink Floyd's The Wall, but the theme is never misunderstood (does anyone really know what Tommy is about?).

Here are the best and blessed songs from the 11 track album:

"Wake Up! Go! Go! Forward!"
This is what the world was expecting when Pope Francis first announced that his LP was going to be a progressive rock journey through the words of God. Exclusively dropped by none other than music mag Rolling Stone, the exclamation-point-heavy song title doesn't even begin to prepare the listener for the aural onslaught of calculated, howling math rock guitars, electric organ synths and massive, arena-sized production, mixed with the Pope's speech, spoken in English, about the evils of living an apathetic life and instruction to "wake up!"

"Annuntio Vobis Gaudium Magnum!"
The synths, Jethro Tull flutes and etheral choir are the centerpiece in this mellow but haunting opener that sounds more like an outtake from the musical Les Miserables than a jam from the upbeat Wake Up!, but the Pope's eclectic musical taste assures that there's a little somethin' for everyone.

"Cuidar el Planeda"
On the poppiest track from Wake up!, the Pope wants to make damn sure he'll spark a rumba or at least some booty shaking with inspired spanish crooning and flamenco guitar solos, fit for an early '90s Selena B-side