She emerged from a steel cage onto the stage after about an hour between her and the opening act, DJ Mary Mac. But that’s okay, she’s the unapologetic Queen of Pop and you’re not really paying for punctuality. Instead you’re paying for the experience of seeing Madonna’s first visit to San Antonio. Dressed in Kimono-like garments, Madonna started the evening with “Iconic,” the pop song that features sound bites by none other than Mike Tyson. She undresses into “Bitch, I’m Madonna,” a Japanese Samurai-inspired backdrop that definitely pumped up the lady behind me who proclaimed that, “this was her motherfucking song,” and then proceeded to butcher every single word except for the repetitive “who do you think you are,” and “bitch, I’m Madonna.”

Madonna then makes it to center stage to grab a guitar and play a rocked-out version of “Burning Up.” This gives way to the risqué nuns and Shibari clips in the background to which she’s singing “Holy Water,” that, by far, left nothing to the imagination. She centers the stage with a Last Supper orgy that if you didn’t feel any kind of heat you should immediately check yourself for signs of life. The song is mixed with “Vogue.” This happens a lot; she remixes her hits and breathes new movement into them by putting them into her newer songs.

Now I should mention that later in the evening I spent the better part of five songs listening to a murder-me screaming fan, begging for “old school, Madonna,” because she paid good money. From simulating acts with priests she finishes "Holy Water/Vogue" tied up herself. She moves into the sinful “Devil Pray,” and with hands knotted she presents them to a seated priest who exchanges them for a Bible.

From here we learn that with each video clip interlude the evening will be divided up into four themed segments, plus the encore. She goes through countless outfit changes that happen so fast you better have your eyes fixated if you want to catch them. The next segment is a '50s themed car garage where Madonna not only slides on the cars but also several guys.

On the next number, Madonna emphasizes the point that her acoustic partner is from Texas, as if we’ll warm to him all the more. She finishes off the segment with “Deeper, Deeper,” “HeartBreak City” – on a staircase that came from the sky – and a classic, “Like A Virgin,” that’s found a way to become more pop sounding.

Next is the Spanish heat where dancers do beautiful acts of sexy things on beds until Madonna comes back with bedazzled masked bulls to “Living For Love,” and then to “La Isla Bonita,” picking up some Spanish guitar along the way.

The crowd is pumped, and here Madonna decided it’s time to have a conversation with us. “It’s good to be back in America." She just played a show in Mexico City a couple days ago, "where people speak the language of ‘Fuck.’” It also happens to be a birthday of one of her dancers so let the spanking begin because she “was put here by God to put people in their place[s]." After an acoustic “Who’s that Girl,” she receives a giant rosary from a fan. Madonna goes into “Frozen” and “Rebel Heart.”

The next interlude involves men swinging on poles over the crowd, which transforms into a jazzy club as she starts off “Music” in cabaret style before going back to the original version. But then she pauses in the middle of the song to play around with the crowd. Madonna starts singing “Deep in the Heart of Texas,” because we’re in Texas and then goes back into “Music.”

From "Music" she went into another crowd pleaser, “Material Girl,” as she pushes guys off her angled stage to a wedding progression where she's prepared to marry a fan. Instead she serenades her future bride with “La Vie En Rose,” in French while playing the ukulele. During “Unapologetic Bitch,” an audience member dressed in Cowboy attire comes to the stage and they dance, but he’s not from San Antonio, or from Texas. However, he is the unapologetic bitch of the evening, so it's okay. She’s done, bye bitches. Kidding she comes out in full end of the year celebration for “Holiday,” her encore. 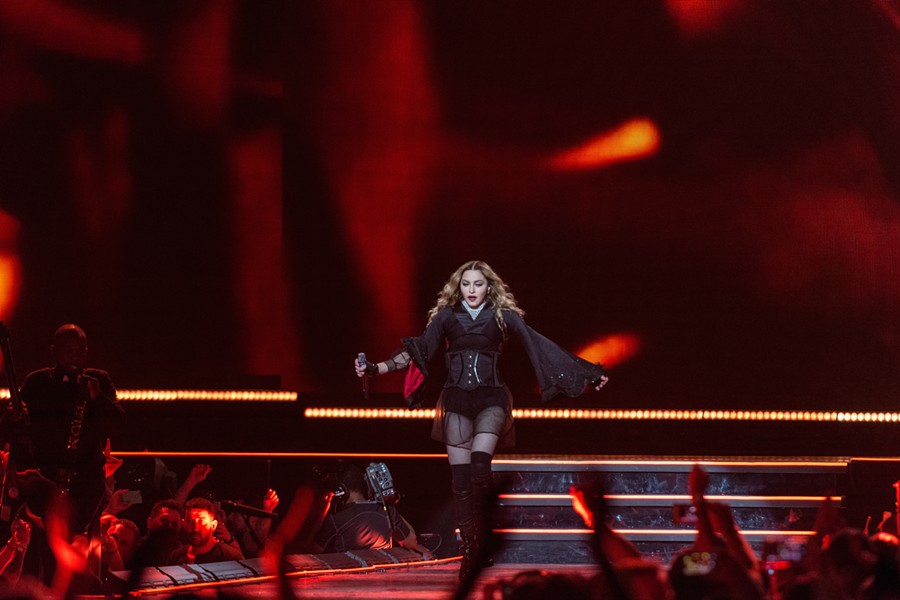 For her first time playing San Antonio, Madonna sure made up for the nearly three decades of her career of avoiding the Alamo City. With countless costume changes and no real holding back this has been one of the best shows I’ve seen in a while. But what else do you expect when it’s Madonna, bitches?