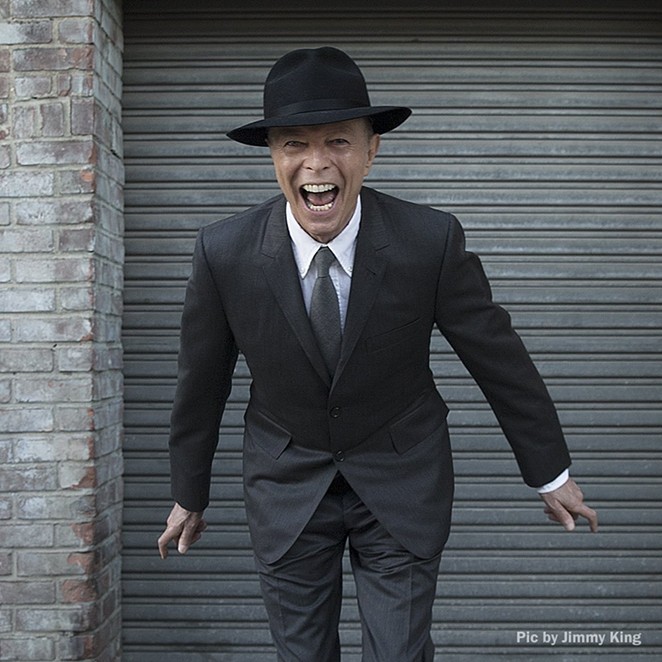 If the David Bowie blues have got you down, just give this recently rediscovered session that features Bowie impersonating some of the greatest pop singer-songwriters a spin.

Bowie can be heard laughing and joking around between takes over the synth-heavy, rolling tune that includes the seemingly Springsteen-inspired lyrics "When the fire broke out on the Rio Grande, put my foot to the board and she ate up the sand ... left nothing at all but the sound of a rock 'n' roll band."

First up is Springsteen who, via Bowie, sounds like a rather convincing Neil Diamond, actually. Next is, what I presume to be the sheepy bleating of Neil Young, followed by what sounds like a German Tom Waits. Bowie's rendition of his frenemy Lou Reed is next and is probably the most spot-on interpretation of the handful. Following Lou is said to be an impersonation of British actor and singer-songwriter Anthony Newley, who co-wrote the gloriously optimistic tune "Feeling Good" made popular by genius-songstress Nina Simone and who sounds the most like Bowie. Next is Iggy Pop, someone whom Bowie states is "difficult. He's somewhere between all of 'em." Last is what sounds like Tom Petty doing a sedated Axl Rose.

Supposedly, the comedy takes were originally in the possession of record producer Mark Saunders, who passed them along to a friend who subsequently posted them last week.

Give the endearing video a listen and see if it can't bring a smile to your face as you recall the wit and brilliance of one of the world's greatest rock 'n' roll artists.