An Atlantan Reflects on San Antonio and its Musical Legacy

I am remarkably unqualified to write about Sunday night’s Patio Andaluz Reunion at the Tobin Center. I did not attend Lanier, South San Antonio or Burbank High School. In fact, I’ve lived in San Antonio for less than a year and before that I had only visited once as a kid for my Uncle’s 1987 wedding, where I think I was first introduced to the concept of a bacon-wrapped steak.

Coming here from Atlanta, Texas in general and San Antonio in particular, has been an entirely new experience for me. Through the lens of a music historian with a research focus on Rhythm & Blues music, however, I witnessed something at the Tobin Center that should leave every San Antonian’s heart bursting at the seams with love and joy. I know that I felt it.

Other cities don’t have this. Many will remember the PBS Doo Wop 50 specials and, to some degree, the Patio Andaluz Reunion concert seemed to follow a format loosely based on this concept. These concerts were uniquely planned and well executed but are not happening all over the country, where the music of our parents and grandparents is generally relegated to “dusties” status, given a passive nod as nostalgia acts perform at casinos, state fairs and retirement communities.  What Henry Peña and his organization presented was a beautiful piece of community outreach, further legitimizing the culture of the West Side Sound. Not only were the musicians, many of whom still perform at least semi-regularly, presented to play their hits of the 1960s, they were presented by Henry Peña as people who were respected members of the community rather than just singers and musicians trotted on stage to sing a couple of old songs.

The Dreamliners, whose original members did not perform, were introduced and brought on stage to be thanked and shown that they were loved. Bouquets of roses were brought up to them from audience members. Some of the loudest applause of the night came during their introduction when their alma mater, “South San” High School was mentioned. These were not merely women who recorded a few obscure singles as a girl group for Abe Epstein (though they certainly did). The Dreamliners were neighbors, schoolmates and friends (perhaps ex-girlfriends), being celebrated for contributing to the community. 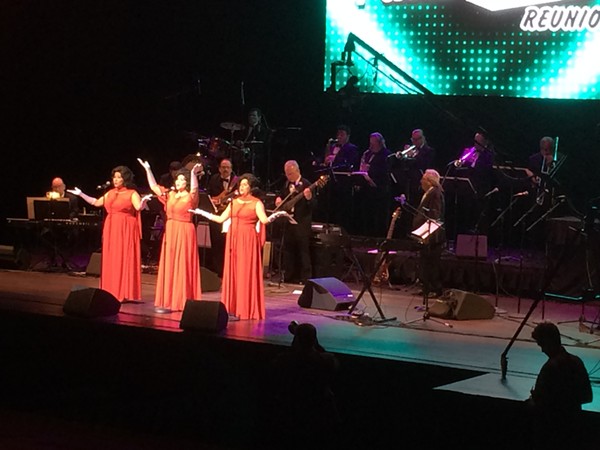 Then there was the dancing. From the second song of the night, Sonny Ace’s signature song “Just A Gigolo,” couples filled the dance floor for the remainder of the night. Slow dancing was clearly the order of the evening, as emcee Henry Peña made a (nearly) romantic joke about Aqua Net (you had to be there for that), to Archie Bell’s one-liner “You gotta squeeze the Charmin!” there was no shortage of love in the air.  When Rudy Tee opened his set with “Talk About Soul,” the tribute to the Royal Jesters performed “That Girl,” Jimmy Charles sang “Mustang Sally,” not to mention Archie Bell’s “I Just Can’t Stop Dancing” and “Tighten Up,” it was proven that there is still plenty of soul left in those old shoes for the up-tempo numbers as well.

As the night went on, I found myself admiring the dancers in the audience as much as the musicians on stage. I thought about what the Municipal Auditorium and the Patio Andaluz must have been like in their prime, as men with their fedoras set at the precise rakish angle proudly strutted down the aisles with a dancing partner on their arm. Though there may be no match for the Patio Andaluz in San Antonio today, that piece of culture is not just a memory. Archie Bell summed up the feeling that had to have been shared by so many on a beautiful Sunday night when he said “I don’t want to go to work tomorrow, I want to dance tonight.”

This setting was tailor made for Sunny Ozuna to bring the event to its climax. Again, Henry Peña triggered a huge audience response, this time for mentioning Burbank High School as Sunny was brought on stage in the first of his three outfits. Sunny was in rare form as he performed just a few of his many hits. We were treated to “Smile Now Cry Later,” “Talk To Me,” “Put Me In Jail” and what may have been an unplanned performance of “Golly Gee,” which showed the level of professionalism on the part of the 16-piece orchestra, led by Little Henry Lee. This also gave some friends and I a good laugh after the show as we discussed how many of the band members might have been hired and fired by Sunny over the last 40 years.

In the months that I have been here, I have on numerous occasions witnessed DJs playing original 45s to 20 and 30-somethings at bars along the St. Mary's Strip, who sang along to the sounds of San Antonio, whether it was a song by the beloved Dimas Garza (with or without The Royal Jesters at his side), one of Sunny’s timeless classics or Little Jr. Jesse’s anthemic version of The Radiants “Ain’t No Big Thing.” I’m consistently impressed that these records are still loved so many years later by new generations of fans. Sunday night at the Tobin Center, however, illustrated a whole new level of the love this city has for it’s musicians, who may have also just happened to rehearse in garages down the block from you or your parents back in the day.

I may be new to town, but the affection and interest in preservation of the culture that I witnessed at the Tobin Center was truly impressive. My hope is that San Antonio won’t take this for granted. If the Patio Andaluz Reunion was any indication of how the musicians of San Antonio are remembered and respected, I’m going to love living in this city.