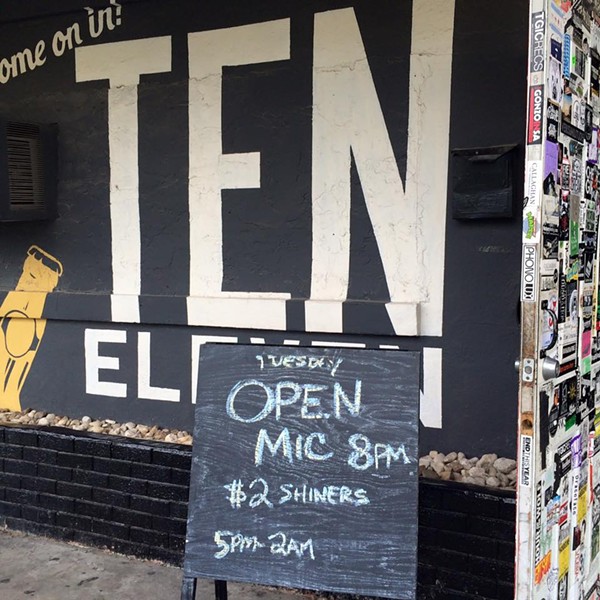 For eight years the bar just east of the River Walk and north of the oldest VFW in Texas, the dimly-lit, sticker-splattered meeting ground of hardworking local groups and road-weary rock 'n' roll bands, has provided San Antonio with a space to mosh, mock those moshing, mock-mosh and behold some of the best, hardest working bands in rock 'n' roll.

As a venue with a capacity of about 150 inside, but replete with a perfect patio for smoking, making out, farting and whatnot in the back, The Ten Eleven – originally The Warhol – has been the city's best venue for intimate shows, the body heat and passion of those in the room proof of the physical and emotional catharsis of the rituals of rock 'n' roll. The former owners – Brandon Hicks, Colin Wells and Jordan Williams – have released a Facebook post stating that they will be handing over ownership of the venue that was a favorite for local noise bastards The Grasshopper Lies Heavy, indie orchestra Deer Vibes and which recently hosted Sunn O)))'s Stephen O'Malley, to Michael Carrillo. The trio cited "adult things" as the main reason for their passing on of the bar, stating:

"When the club opened, it was difficult to consider things like families, wives, kids, mortgages...adult things. We were basically still kids ourselves. Now, we have all of those things and it’s become increasingly difficult to balance all of that while still operating a successful music venue. Right now is the best time for someone new to come in with fresh ideas, so that they can take what we have built and make it even better."

Carrillo has long been the very visible fourth partner at the club. Running sound, tending bar, and any other number of odd but absolutely necessary jobs have been manned by the formidable singer-songwriter, frontman for Deer Vibes and Michael J & the Foxes.

Stay tuned for more info on what plans Carrillo has for the future and any other scene info regarding the club at 1011 Avenue B. There will be a farewell weekend for the trio on April 1 and 2.

As for Hicks, Williams and Wells: Thank you, gentlemen. It was a great run. Thanks for the hard work and the exceptional heart and love for rock 'n' roll. Thank you for giving it back to your city.