Live and Local: Chris Stapleton at the 2016 San Antonio Stock Show and Rodeo

It was a mother and a half to get into the Chris Stapleton show. I was surrounding by some of the only people in the U.S. that looked like they may be against marijuana, and I was super stoned. Through the intestinal corridors of the AT&T Center I was ushered. Minutes seemed like years, it was scary. I was taken to a place the employees call “The Hole.” It was a “media room” complete with fluorescent lighting, coffee-stained carpet, a couple TVs showing the live feed of the rodeo taking place inside of the building whose bowels I was buried. Finally, I got a seat, leaving behind our photographer to wait for her two-song opportunity to shoot Stapleton and co., sorry Gabby. I watched some horse buckin’, calf ropin’, bull ridin’, all that good shit. Did you know that they tie a rope around the horses' and bulls’ balls to make them buck? Now you do. 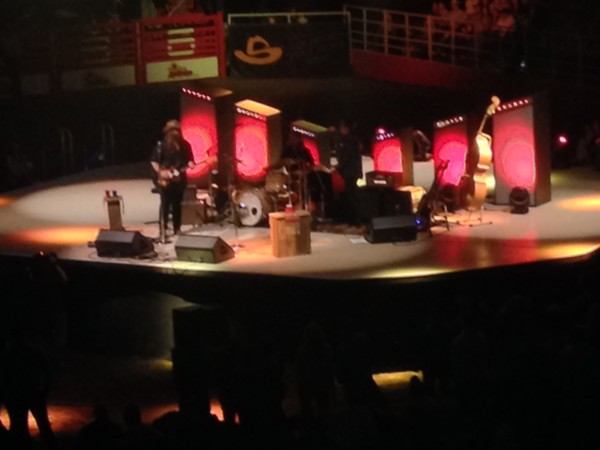 The band consisted of Stapleton on lead and rhythm guitar– a beautiful Fender Jazzmaster, no less – bass, drums and Stapleton's wife Morgane, who shared vocal/harmony duties. Stapleton's skills as a lead/rhythm player would become more evident throughout the set as the three-piece band's sound, a particularly small combo of musicians for country music, never felt lacking. They kicked the set off with the boot-stomper "Nobody to Blame," off of the recently Grammy-earning Traveller. Next came the title track and as Morgane's harmonies became more prevalent, you got the impression that the band was ready to get to work. Third was the slow-burning ballad "Fire Away." They sounded almost identical to the record, making you wonder what a breeze it must have been to lay it all down, their skill and poise necessitating few takes.

Next was a ZZ Top-sounding cover of Rodney Crowell's "I Ain't Living Long Like This," which gave the first impression of the similarities between Waylon Jennings and wife/harmonist Jessi Colter that Stapleton and Morgane share, a dynamic that would further be hammered home throughout the set. The bassist then switched to the upright and Stapleton to his acoustic for the contemplative "Daddy Doesn't Pray Anymore," followed by "You Are My Sunshine," a showpiece for Morgane's impressive vocal talent and the duo's eye-making back and forth between harmonies, with the occasional knowing smile.

Then Stapleton and the band, preemptively, went into a verse and chorus of Skynyrd's "Freebird," drawing to mind the similarities between Stapleton's voice and that of the late, great Ronnie Van Zant. After that was "The Devil Named Music" and a sing-out to the Stapletons' son and daughter. As Stapleton sang "Sometimes I'm stoned," the rodeo crowd whooped and hollered, giving me some assurance that I wouldn't be tarred and feathered if my mental state somehow became common knowledge. The group then kicked into a roadhouse blues cover of Tom Petty's "You Don't Know How it Feels" and the crowd took their first bathroom/beer break.

"Whiskey And You" followed and the crowd hurried right back to their seats to complement the tear-jerker ballad, followed by a shout-out to country crooner Marty Robbins and the Robbins-inspired "(It Makes Me Want) More of You" which I assume is Stapleton's version of Robbins' 'My Woman, My Woman, My Wife." At this point I was really missing my wife and wished she was there to hold during the inspirationally romantic set, as the married couple on stage shot Valentine's into each others eyes. Next was George Jones' 'Tennessee Whiskey," also on Traveller, which made me curious as to if The Possum ever heard it before his passing. I believe he would have been proud. Rounding out the impeccable set and the 2016 San Antonio Stock Show and Rodeo was "Outlaw State of Mind."

With that, Stapleton and crew were onto the bed of a Chevy and taken into the underground of the AT&T Center. An exceptional performance that really made me feel like some artist's talents are undeniably worthy of Grammys and thousand-seat arena crowds, Stapleton absolutely being one of those artists.