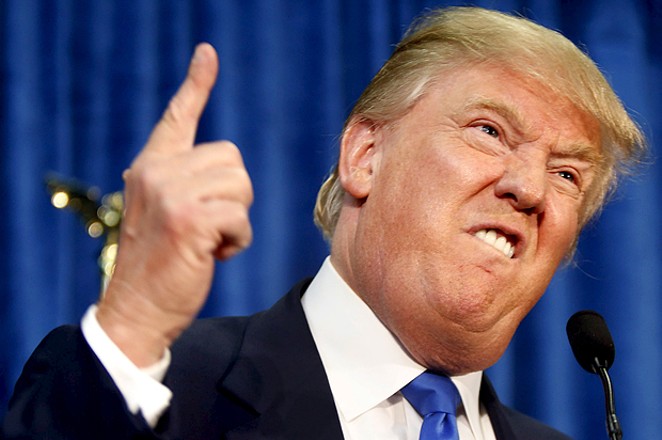 Honestly, it's hard to find something that is more annoying than Donald Trump, but these songs put up a mean fight. Still, we'd rather listen these 15 crappy tunes before listening to that man speak.

Toby Keith – “Courtesy of the Red, White And Blue (The Angry American)”
This pretty much sums up Trump’s foreign policy, don’t ya think? If he quit putting his foot in his mouth and instead put it in Russia or China’s ass.

Aqua – “Barbie Girl”
Although a satirical send up of Barbie culture (I hope), this infuriating number is an homage to the Donald’s preferred partner: silent, malleable and made of silicone.


This is The Donald’s daily song-to-sing-to-oneself-in-the-mirror-before-a-power-meeting jam.

Remember when this Latin dance craze swept the nation like a tide of illegal rapists? … I mean, I’m sure some of them are good people.

Owl City – “Firefiles”
“Fireflies” is to the Postal Service’s “Such Great Heights” as D. Trump is to supporter and KKK Grand Wizard David Duke; a repackaged version with more suburban cred.

Remember when Jessica’s little sister got acid reflux and had to lip synch on SNL and everyone hated her forever. Still less obnoxious than tiny sausage-fingered Trump.

Toby Keith – “I Wanna Talk About Me”

Because Donald is so good at talking about Donald.

If lyrics like “I like girls that wear Abercrombie & Fitch … Chinese food makes me sick” don’t make you want to shove screwdrivers into your eardrums, you’re probably voting for Trump.

Get as much of this number as you can because if Trump becomes president, the cutest member of Menudo is never gonna be let into the U.S. again.

Although the title was changed to “Let’s Get it Started,” for obvious reasons, this totally un-P.C. jam from Fergie and co. could be Trump’s campaign theme song.

We just can’t wait for the day when Donald J. Trump is sworn in and we can fire up the ol’ grill and wolf down some cheeseburgers in what will soon be a Trump-trademarked paradise.