With all tickets going on sale this Friday, March 18 at 10am, the Tobin box office will be busier than Grand Central Station! Amiright!? Tickets for all four events can be purchased online at tobincenter.org, via phone (210) 223-8624 and at the Tobin Center Box Office at 100 Auditorium Circle.

Taylor Hicks got his start on American Idol with a rendition of Sam Cooke's classic "A Change Is Gonna Come," very quickly becoming a fan favorite as the silver fox from Birmingham with the pipes of gold. Hicks will bring his sincerity, which propelled him to the winner's circle on season five and gave exception to Simon Cowell's snobbish rules for success, to the intimate Tobin Studio Sessions on Thursday, May 26 at 7:30 p.m. General Admission tickets are $36.50. Tickets for special reserved seating in the first two rows, which includes a meet and greet, are $65.

Friday, June 10, Jo Dee Messina, the first female country artist to score three multiple-week number one songs from a single album, will be performing hits from her twenty-plus year career which has garnered her 16 Top 40 tracks, including breakthrough pop country hits "Heads Carolina, Tails California" and "Bye, Bye." Tickets are $29.50 and $39.50 and the show starts at 8 p.m.

Vicki Lawrence, the star of Mama's Family, as well as a fixture on San Antonian Carol Burnett's legendary comedy show, will be pulling double duty as she visits the HEB Performance Hall in "Vicki Lawrence and Mama: A Two Woman Show" on Sunday, August 21. The show begins at 7 p.m. and tickets are priced at $24.50, $36.50, and $49.50. 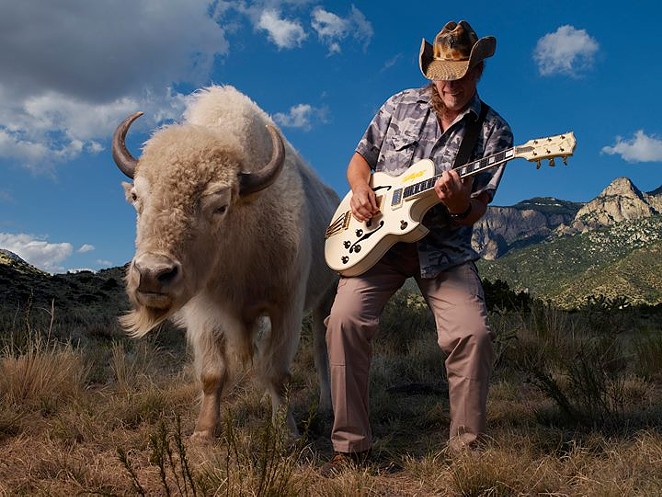 Last, and certainly not least in terms of homophobic, gun-worshipping, racial slur-spouting jingoism, is Ted Nugent. The Motorcity Madman, who has lately been living up to his name, will be at the Tobin for his "Sonic Baptizm Tour."

I'm not saying it's culturally irresponsible for the Tobin to book Ted, it is a free country, so they tell me. However, Nugent's verbal diarrhea, including his response to folks that immigrate to the U.S. and cannot speak English, "If you no comprende, eat shit and die," have made the Freudian-field day a target for numerous civil rights groups throughout the U.S. and people that generally cannot stand racism and ignorance.

In short, this is gonna be one big Trump rally. Make sure to bring your piece and thank God for open carry!